The Horned Frogs Welcome Oklahoma in a Clash of the Undefeated 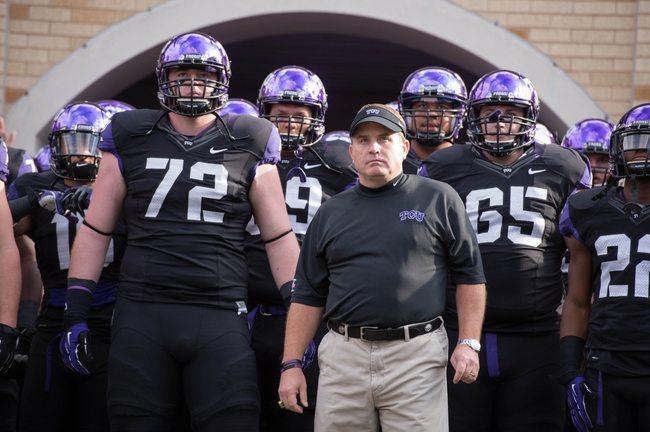 Specifically, TCU is averaging 44.7 points per game on 5.7 yards per rush play, 6.9 yards per pass play and 6.4 yards per play against teams that would combine to allow just 4.7 yards per rush attempt, 6.9 yards per pass attempt and 5.8 yards per play to a mediocre offensive squad.  Overall, the Horned Frogs are 1.0 yards per rush play better than average, while being just mediocre through the air.  One of my favorite things to do is to invest on .501 or greater home underdogs that possess a solid ground attack, especially when they are matched up against a .501 or greater conference opponent.  TCU applies to several statistical indicators of mine, including a 21-3-1 ATS angle, that is predicated upon  the Horned Frogs’ run game.

The strength of TCU is its defense that is allowing a mere 7.0 points per game on 2.1 yards per rush play, 4.6 yards per pass play and 3.1 yards per play to teams that would combine to average 3.5 yards per play against a mediocre stop unit.  In fact, TCU currently leads the Big 12 Conference in total defense, allowing just 218.7 yards per game.  “He wants to be the best defense in the nation,” TCU safety Sam Carter said of head coach Gary Patterson.  “We get the same thing every day. … Nothing’s changed.  He’s still intense, wants perfection.”  In its last two meetings with Oklahoma, TCU has limited the potent Sooner attack to just 20 and 24 points, respectively.  And, the Horned Frogs lost those two games by just three and seven points.

Oklahoma head coach Bob Stoops, who is 2-5 ATS as a conference favorite in games involving undefeated teams, cites discipline for the Horned Frogs’ success on the defensive side of the ball.  “They’re sound fundamentally, really disciplined and they know what they’re doing,” Stoops said, noting how Patterson has “a set system that their players get trained in at a young age.  They’re really fundamental in how they do it.”  TCU also makes its opponents work for every score as Patterson’s squad is limiting foes to 31.2 yards per point this season.  TCU will also have the benefit of facing Oklahoma without star running back Keith Ford, who hasn’t played since September 13 due to a leg injury.

The Horned Frogs’ underrated status is best evidenced by the fact that they are 5-0 ATS in their last five games and 4-1 ATS in their last five games following a win. Meanwhile, head coach Gary Patterson is 24-2 at home after allowing ten or less points in his previous game and 8-0 ATS versus teams with a winning record.  TCU is also 10-4 ATS as home underdogs, including a near-perfect 7-1 ATS versus .900 or better opposition.  Those trends tell me three things: (1) TCU remains undervalued in the betting market; (2) TCU does not like to be disrespected on their home field; and (3) the Horned Frogs save their best for elite opponents.

Oklahoma is playing its third road game in four weeks and has the Red River Rivalry on deck against Texas, which is significant in that the Sooners are a money-burning 5-13 ATS in conference games before facing the Longhorns, including 1-7 ATS versus an opponent off a blowout win.  Grab the generous points with TCU and invest with confidence.