Hooker Takes Over Top Spot on Heisman Trophy Betting Board 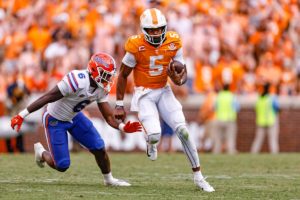 Tennessee QB Hendon Hooker has taken over as the betting favorite to win the Heisman Trophy. On Saturday, Hooker completed 19-of-25 passes for 245 yards and three touchdowns as his No. 2 Volunteers beat No. 19 Kentucky 44-6. Hooker also ran for a touchdown giving him 25 total – 21 passing and four rushing – for the season.

Hooker is now a +100 favorite to capture college football’s top individual award. He takes over the favorite role from Ohio State QB C.J. Stroud, who had been the favorite since the opening of the market. Stroud led his No. 3 Buckeyes to a 44-31 win over No. 13 Penn State last week. The OSU quarterback completed 26-of-33 passes for 354 yards and a touchdown. For the season, Stroud is completing 71 percent of his passes and his 29 touchdowns are tied for the national lead. Stroud is given +175 odds to win the Heisman this year.

No one else is even close. Next on the board is USC quarterback Caleb Williams and Michigan running back Blake Corum. Both are listed at +1400. Williams has thrown for 2,382 yards and has accounted for a total of 27 touchdowns. His Trojans are 7-1 and in the running to reach the Pac-12 championship game.

Corum is fourth in the nation in rushing with 1,078 yards. He has scored 14 touchdowns and averages six yards per carry for the Wolverines who are now 8-0 after a win over in-state rival Michigan State last week. Corum would seem to be more of a longshot since five of the last six Heisman winners were quarterbacks. Alabama wide receiver DeVonta Smith (2020) is the only non-quarterback winner in the past six seasons.

The last running back to win the award was Derrick Henry, who also played at Alabama. Since Reggie Bush’s Heisman was vacated in 2005, only two running backs have won the award. Ironically, both were from Alabama. In addition to Henry in 2015, Mark Ingram won the award in 2009.

Oregon QB Bo Nix and North Carolina QB Drake Maye are both listed at +2500. Neither seems to have a realistic shot at the award, but both of their respective teams still have a shot at the College Football Playoff.

North Carolina is 7-1 overall and leads the Coastal Division of the ACC with a 4-0 record. The Tar Heels are ranked No. 17 and Maye is fourth in the nation with 2,671 passing yards. He is tied with Williams with 29 touchdowns. Nix’s Ducks are 7-1 and 5-0 in the Pac-12. Since a season-opening loss to Georgia, Nix has been terrific. He’s completing 72.3 percent of his passes for 2,221 yards and 20 touchdowns. Nix also averages 7.3 yards per carry, has 441 rushing yards and has a team-best 11 rushing touchdowns.

The most interesting longshot has to be reigning Heisman winner Bryce Young of Alabama. The Crimson Tide, who are ranked sixth in the country, still have a shot at winning the SEC West and are very much alive in the CFP race. In their only loss to No. 2 Tennessee, Young was outstanding with 455 yards passing and two touchdowns. At +3300, there is still time for Young to sneak in and become just the second repeat winner in Heisman history.