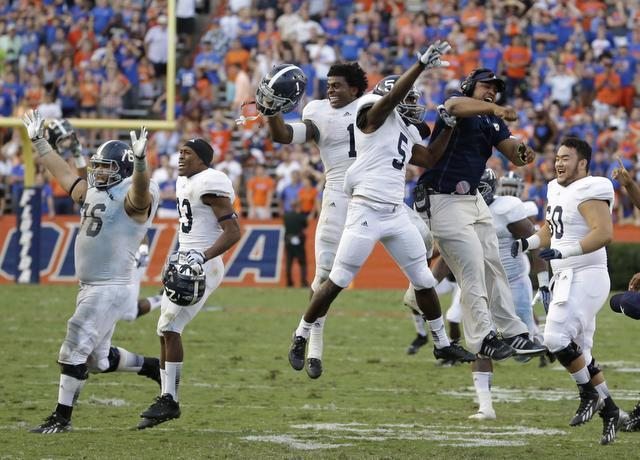 As I stated in last week’s selection on Georgia Southern, who would have defeated Georgia Tech if its starting quarterback did not get injured in the fourth quarter, has one of the best college football coaches in the nation in Willie Fritz. Prior to arriving in Statesboro, Fritz was taking Sam Houston State to consecutive National Championship games. Fritz put together a 40-15 record during his four-year tenure (2010 to 2013) with the Bearkats. Prior to his stay in Huntsville, Fritz amassed a 39-5-1 record and won two NJCAA National Titles as the head coach at Blinn College between 1993 and 1996. Needless to say, Fritz’s coaching credentials are both impressive and compelling, which is one of the reasons why I am so bullish on the Eagles in 2014.

Georgia Southern’s triple-option offense has undergone a modest change under Fritz to include more Pistol and spread formations like those utilized by both Auburn and Nevada. The changes seem to be having a positive affect as the Eagles are averaging 48.0 points per game this season on 8.2 yards per rush attempt, 12.1 yards per pass attempt and 9.1 yards per play. Overall, Georgia Southern’s offense has been 1.7 yards per rush play, 3.5 yards per pass play and 1.8 yards per play better than average through the first three weeks of the 2014 campaign. The explosive nature of the Eagles’ attack is best illustrated by the fact that they are averaging 11.5 yards per point this season.

The most telling statistic about Georgia Southern’s offense is the fact that the Eagles averaged an impressive 8.0 yards per play on the road against two ACC teams in North Carolina State and Georgia Tech. The offense is led by returning quarterback Kevin Ellison, who rushed for 886 yards at 7.0 yards per carry last season. Indeed, Ellison earned a helmet sticker from Mark May on ESPN’s College Football Final after rushing for 118 yards in Georgia Southern’s upset over Florida last year. Overall, Ellison averaged 8.5 yards per pass attempt last season against teams that would combine to allow just 8.1 yards per pass play, and I expect continued improvement from the sophomore in 2014.

Reports from Statesboro indicate that Ellison practiced on Wednesday without any limitations despite being listed as questionable for this afternoon’s game. I don’t see how South Alabama will have any success stopping the Eagles’ attack as the Jaguars are 0.6 yards per rush play, 0.3 yards per pass play and 0.4 yards per plat worse than average defensively. My models project 30 or more points scored by Georgia Southern in this contest, and I fully expect the Eagles to run up and down the field regardless of who is behind center (Favian Upshaw is the backup QB).

The situation seems to favor Georgia Southern as the Jaguars are coming off their “Super Bowl” against Mississippi State where they had their first home sellout in program history. After being waxed 35-3 by the Bulldogs (outrushed 288-57), I would not be surprised to see South Alabama sleep walking through the first part of Saturday’s game. My math model favors Georgia Souther by eight points and the Eagles apply to a very good 57-9-1 ATS situation of mine that contains a perfect 14-0 ATS subset angle that is trigged in this game. Take the Eagles and invest with confidence.