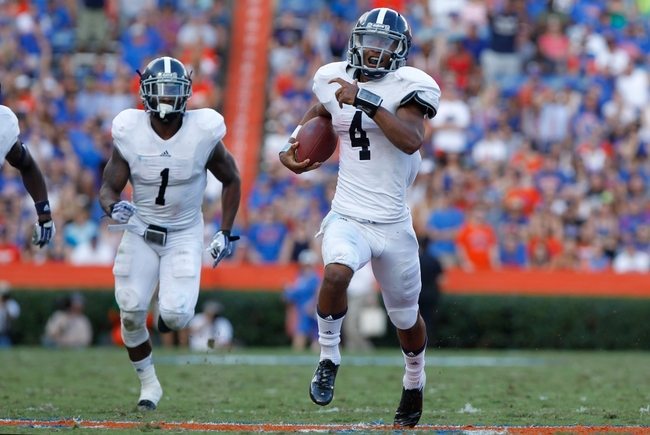 Georgia Southern has one of the best college football coaches in the nation, although most sports bettors have no idea who Willie Fritz is.  Prior to arriving in Statesboro for Georgia Southern’s inaugural FBS campaign, Fritz was busy taking Sam Houston State to consecutive National Championship games.  Fritz put together an impressive 40-15 record during his four-year tenure (2010 to 2013) with the Bearkats.  Prior to his stay in Huntsville, Fritz amassed a 39-5-1 record and won two NJCAA National Titles as the head coach at Blinn College between 1993 and 1996.  Thereafter, Fritz  departed for Central Missouri where he compiled a 97-47 record between 1997 and 2009. Based upon his resume and overall football acumen, Fritz is one of the most underrated head coaches in the nation.

Georgia Southern’s triple-option offense has undergone a modest change under Fritz to include more Pistol and spread formations like those utilized by both Auburn and Nevada.  The changes seem to be having a positive affect as the Eagles are averaging 53.0 points per game this season on 8.4 yards per rush attempt, 13.1 yards per pass attempt and 9.3 yards per play.  Overall, Georgia Southern’s offense has been 1.5 yards per rush play, 3.5 yards per pass play and 1.5 yards per play better than average through the first two weeks of the 2014 campaign.  The explosive nature of the Eagles’ attack is best illustrated by the fact that they are averaging 10.7 yards per point this season.

The most telling statistic about Georgia Southern’s offense is the fact that the Eagles averaged an impressive 6.8 yards per play on the road against an above-average North Carolina State stop unit.  The offense is led by returning quarterback Kevin Ellison, who rushed for 886 yards at 7.0 yards per carry last season.  Indeed, Ellison earned a helmet sticker from Mark May on ESPN’s College Football Final after rushing for 118 yards in Georgia Southern’s upset over Florida last year.  Overall, Ellison averaged 8.5 yards per pass attempt last season against teams that would combine to allow just 8.1 yards per pass play, and I expect continued improvement from the sophomore in 2014.

The Eagles’ ground attack should have success exploiting an inexperienced Georgia Tech front seven that allowed 5.8 yards per rush play to Wofford and 5.5 yards per rush play to Tulane.  The former statistics are most telling in that Wofford also employs an option attack, but it’s not nearly as efficient as Georgia Southern’s yet it still had success against the Yellow Jackets in week one.  After defeating Florida in the Swamp last year and nearly pulling the upset at North Carolina State this season, the Eagles will not be intimidated by the hostile environment found within the confines of Bobby Dodd Stadium.

The most interesting backstory in this matchup involves Georgia Southern defensive coordinator Jack Curtis, who enters his third season with the Eagles.  Prior to the arrival of head coach Willie Fritz (2014), Georgia Southern exclusively employed a triple-option attack under former head coach Jeff Monken (now with Army).  For those two years (2012, 2013), Curtis’ defense had the opportunity to practice against a triple-option offense on a daily basis.  Georgia Southern will be more than prepared to face the Yellow Jackets’ triple option, and the Eagles’ rush defense has been 0.7 yards per play better than average this season (3.8 yards per rush play to teams that combine to average 4.5 yards per rush play).

The technical analysis also favors Georgia Southern as Georgia Tech head coach Paul Johnson is a money-burning 4-11 SU and 2-12-1 ATS at home versus a non-conference opponent off a win.  Meanwhile, Georgia Southern applies to a very strong 77-51-3 ATS momentum situation of mine that is predicated upon its 83-9 win over Savannah State last week.  That system also includes a 27-9-1 ATS subset angle that is triggered if our ‘play on’ team is installed as an underdog.  Finally, the situation could not be worse for the Yellow Jackets as they have conference revenge games against Virginia Tech and Miami on deck so I would not be surprised to see Paul Johnson’s squad overlook the Eagles on Saturday.