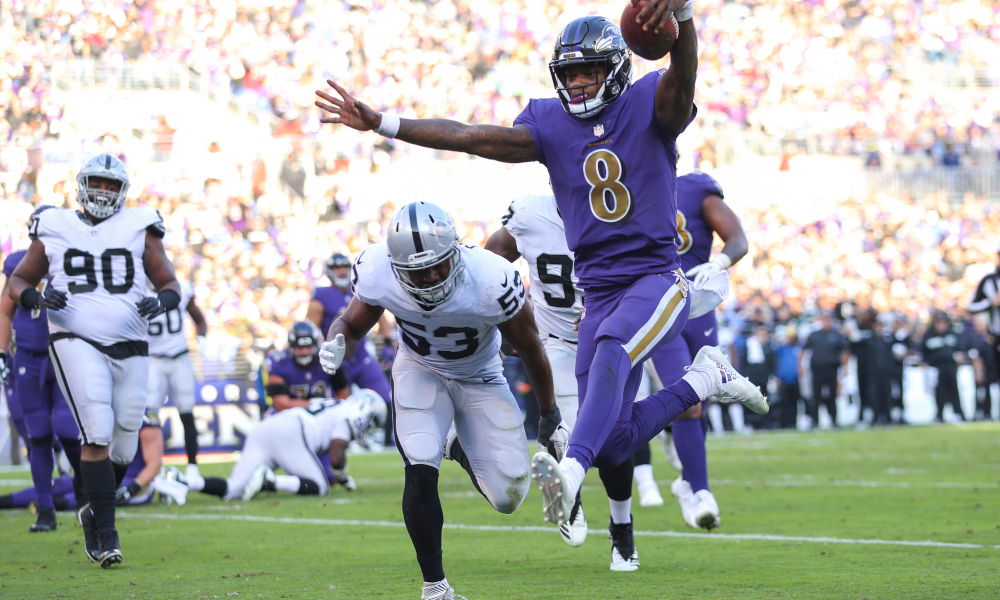 A year ago, Las Vegas played host to Monday Night Football as the Raiders entertained the New Orleans Saints. As a home underdog, the Raiders pulled off a dramatic upset of the Drew Brees-led Saints in the first regular-season NFL game ever played in Sin City. Could Jon Gruden and company do it again?

It will be a tough task though it has been made slightly easier with the bomb that dropped in the Baltimore running back room. The Ravens lost JK Dobbins, Gus Edwards, and Justice Hill for the season. All three of their top running backs are done for 2021 before they ever even played a game.

Not to worry though. Ravens QB Lamar Jackson has the ninth-best total rushing yards since entering the league in 2018. Jackson will have to pick up some of the slack in the ground game and he will definitely benefit from the offseason acquisition of WR Sammy Watkins. Don’t forget the Ravens get LT Ronnie Stanley back too. Stanley missed most of 2020 with an ankle injury.

The Ravens will make do with Jackson and whoever lines up in the backfield. Offensive coordinator Greg Roman is creative enough to figure out how to move the football and score points. The Raiders, on the other hand, may have a tougher time doing so. In the offseason, Vegas retooled their offensive line. When it was all said and done, the Raiders offensive line doesn’t seem to have gotten any better. All-Pro center Rodney Hudson was traded away and starter Richie Incognito is out with a calf injury.

Vegas will start a rookie, Alex Leatherwood, at right tackle. Taking over at center for Hudson is Andre James. What’s interesting about James is that he has never played a single snap at the NFL level and he has never played center before. That may have an effect on the Raiders running game.

The Raiders did pick up RB Kenyan Drake in the offseason. He’ll get his fair share of touches tonight, especially if Josh Jacobs continues to be affected by his recent illness. Jacobs was downgraded to questionable for tonight’s game. Regardless, Vegas will have a difficult time going up against a Ravens defense that ranked in the top-5 in most statistical categories last season.

Baltimore opened as a 6.5-point favorite over the Raiders. The line has adjusted down to Baltimore -4. The Ravens have been a strong performer against the spread recently and against the Raider. Baltimore is 7-1 ATS in its last eight games. The only loss coming in last year’s 17-3 playoff loss to Buffalo.