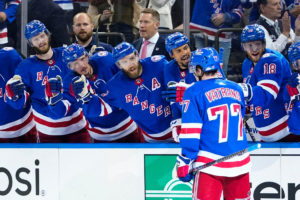 It was a shock when the New York Rangers won Game 1 of the Eastern Conference finals in the Stanley Cup playoffs. The bigger surprise was the final score – 6-2. The Rangers picked the right time to go hot on offense as they totaled six goals. That’s been somewhat of a trend this postseason as the Rangers have put up 36 goals in eight home games. Can they repeat that in Game 2 tonight?

The Lightning are the two-time defending Stanley Cup champions for a reason. One reason is the team’s ability to bounce back from bad losses. Under John Cooper since the start of their first run to the Stanley Cup in 2019-20, the Lightning are a perfect 16-0 following a loss in the postseason.

Tampa Bay also has one of the best goaltenders in the NHL in Andrei Vasilevskiy. He doesn’t allow five-plus goals very often – this was the second time this postseason – and don’t expect him to allow that many tonight. Vasilevskiy didn’t get a lot of help from his defense. Expect that to change too as the Lightning tighten up on New York tonight.

The Game 1 win gives the Rangers their first series lead of the postseason. New York has never led a series this postseason until winning Game 7. The Rangers were down 1-0 and 3-1 to Pittsburgh and 2-0 and 3-2 to Carolina.

Tampa Bay appeared sluggish in Game 1 and that may have been due to the fact the team hadn’t played in nine days. The Lightning swept Florida and had not played since May 23. Over the last three postseasons, Tampa Bay has won 10 straight series. The Lightning has actually been in this position in this year’s playoffs. They dropped a 5-0 decision to Toronto in their first-round series with the Maple Leafs. They came back and won in seven games.