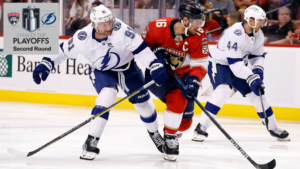 For the first time this postseason, NHL opponents will play on consecutive days. It’s probably a good thing for the Florida Panthers who find themselves trailing two-time defending Stanley Cup champion Tampa Bay. The Lightning won again yesterday 5-1. It was the third straight game in which Florida managed just a single goal

Florida finished the regular season with the most wins and won the President’s Cup as the team with the most points. Now, the Panthers face elimination by Tampa Bay for the second consecutive season. The two teams just played on Sunday afternoon, which will present the same issue to both teams – lack of rest. The difference will likely be that Tampa Bay will rest goalie Andrei Vasilevskiy

Vasilevskiy is the guy who has, for the most part, silenced the Panthers who were the highest-scoring team in the NHL this season. Florida has just a single goal in each of the three games in the series so far. Vasilevskiy has slowed the Panthers down, but the former Vezina winner is probably going to be on the bench tonight. With a three-game lead, Tampa Bay can afford to sit their star netminder tonight and put Brian Elliott in his place. That’s the good news for Florida as the last time the Panthers faced the Lightning without Vasilevskiy they won

With the three straight wins, Tampa Bay is now 5-0 SU in its last five games. The Lightning are outstanding at home with a 6-1 SU record in their last seven. They also have fared well against Florida at home going 4-1 SU in the last five games against the Panthers at Amalie Arena

The Panthers didn’t get to be the winningest team in the NHL this season losing on the road. Florida is 11-5 SU in its last 16 games away from home. For the season, the Panthers are 26-13-6 SU on the road and 20-25 ATS in road games

The Panthers regularly went Over game totals during the season. They were the only NHL team to score over four goals per game. Florida’s O/U record for the season is 49-36-6, but the Under has been the trend recently. Eight of the Panthers’ last 12 games have resulted in the Under

It’s the same for the Lightning who have a 49-41-2 O/U record for the season, but the Under is 4-1 in the team’s last five games. In the Florida-Tampa Bay series, the Under has hit in seven of the last nine games. Coming off a game yesterday, fatigue can be a factor that typically results in lower-scoring games

Florida will probably sit Sergei Bobrovsky too. That means Spencer Knight will be in goal for the Panthers. The last time Florida played Tampa Bay without Vasilevskiy, the Panthers won 9-3. The most recent regular-season matchup between the Panthers and the Lightning also resulted in a total of 12 goals. The Lightning won that game 8-4 back on April 24.