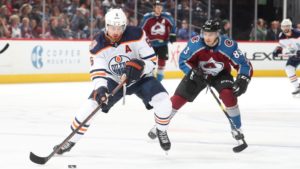 The Western Conference Finals begin tonight in Colorado. The Avalanche were expected to be here as they have been the Stanley Cup betting favorite since the NHL preseason. Edmonton is somewhat of a surprise. The Oilers do have two of the best players in hockey in Connor McDavid and Leon Draisaitl, but their defense has been a weak link all season long.

Edmonton has had to outscore its opposition all season long. They did just that against Calgary in the quarterfinal round. After losing Game 1 by a score of 9-6, the Oilers scored 5, 4, 5, and 5 goals in winning the next four games in a row. There is no question Edmonton can put the puck in the net. The bigger question is can they defend a very good Colorado team.

The Avalanche have some offensive talent of their own with Nathan MacKinnon and Nazem Kadri, leaders of Colorado’s top two lines. MacKinnon and D Cale Makar lead the Avs with 13 playoff points. Mikko Rantanen and Gabriel Landeskog have 11 each and Kadri has 10. How Edmonton stops Colorado is anyone’s guess. Edmonton is averaging 4.33 goals per game in the playoffs. Right behind them is Colorado at 4.30. The Oilers allow 3.08 goals per game, but the Avs have the edge defensively. They are third among all playoff teams giving up 2.70 goals per game.

It will be difficult for Edmonton to beat Colorado at home. The Avalanche are 8-2 SU in their last ten games overall and 10-4 SU in their last 14 at home. During the regular season, Colorado took two of three games from the Oilers and won the only game played in Denver. For the season, the Avs are now 35-6-5 at Ball Arena. Colorado has also won 60 of the 92 games it has played this season as the favorite.

Edmonton has won six of its last seven games. The Oilers won the final two games of their series with Los Angeles and then lost that wild Game 1 with Calgary. The Flames had gone up 6-3, but the Oilers battled back to tie it at 6-all before losing 9-6. The Oilers haven’t lost since.

Beating Calgary on the road gives Edmonton a 5-2 SU record in the team’s last seven games away from home. In the series with Colorado, the Oilers are just 2-4 SU going back six games. With all of their scoring talent, it’s no surprise that Edmonton has seen the Over hit in four of its last five games. For the season, the Oilers’ O/U record is 49-41-4. Colorado actually trends Over as well with a 49-38-5 O/U mark for the season. The Over is 24-19-3 in the Oilers’ home games this season. Six of the Avs’ last ten games have had a total of seven goals or more, including three with nine and one with ten (a 7-3 win over Nashville).