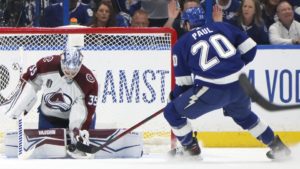 It’s why the Tampa Bay Lightning are the two-time defending Stanley Cup champions. They were down 2-0 in the Eastern Conference finals to the New York Rangers. The Lightning promptly won four straight games and made it to the Stanley Cup finals. Down 2-0 in the finals, Tampa Bay responded on Monday night with a 6-2 Game 3 victory. The question now is if the Lightning can do it again. There’s no reason to believe that they cannot.

On the other end, last year’s Conn Smythe trophy winner Andrei Vasilevskiy stopped 37 of 39 shots and looked more like himself for the first time this series. It was also the first time Vasilevskiy’s save percentage was above .900. Colorado outshot Tampa Bay 39-32 and it was Vasilevskiy that made all the difference in Game 3.

There are some big questions for the defending Cup champions heading into tonight. Whether they can pick up a second straight victory will depend upon who is on the ice. Brayden Point was a late scratch in Game 3 and is questionable for tonight. Nikita Kucherov suffered a lower-body injury and is also listed as questionable.

Working in the Lightning’s favor is playing in the confines of Amalie Arena. Tampa Bay has won eight straight games at home. Overall for the season, the Lightning are 35-9-6 at home and they have won 11 of their last 15 games.

The Avs are in a similar situation with Nazem Kadri who is out indefinitely with a thumb injury. Andre Burakovsky, the hero of Game 1, is likely out tonight too. He has a hand injury. Even without Kadri and Burakovsky, the Avs still present a problem for Tampa Bay.

All three games in the series so far have gone Over the total. Remarkably, there have been 22 goals scored so far between the two teams. Seven of the last eight times that Colorado and Tampa Bay have played the total has gone Over. In the last five head-to-head meetings at Amalie Arena, all five have gone Over the total. Interestingly enough, the total has gone Under in 10 of Tampa Bay’s last 14 games. Both teams trend Over for the season. Colorado’s O/U record is 54-40-5 and Tampa Bay’s is 53-47-2.