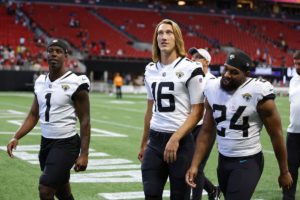 The professional handicappers at Oskeim Sports have the winning information you need before betting on Sunday’s NFL games.  Oskeim’s NFL game previews and Betting Market Report gives you the winning edge.

Analysis: The quarterback matchup features the No. 1 pick in the 2021 draft (Jacksonville’s Trevor Lawrence) and the No. 2 selection in 2016 (Washington’s Carson Wentz).  Lawrence struggled as a rookie (turned the ball over 22 times) but is primed for a breakout sophomore campaign under new head coach Doug Pederson.  Meanwhile, Wentz was traded for the second consecutive offseason and was sacked six times and intercepted once by Jacksonville in last year’s start for the Colts.

Since 2018, Washington is just 4-8 ATS as a favorite, including 3-4 ATS under head coach Ron Rivera. The Commanders are 1-5 ATS in September affairs under Rivera, including 0-3 ATS last season. Take Jacksonville and invest with confidence.

Jacksonville Alert: The Jaguars had 29 turnovers last season, tied for the second most in the NFL. Jacksonville was outscored by 204 points, worst in the NFL and in franchise history, and never scored more than 26 points in a game.