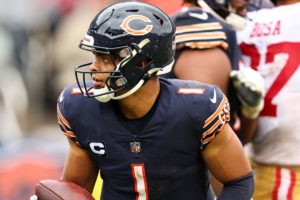 When they face Washington on Thursday night, the Chicago Bears (2-3, 2-2-1 ATS) will be attempting to snap a two-game losing streak and claim their fourth straight victory at home. Since winning their season opener versus Jacksonville, the Commanders have lost four straight and are 1-4 (1-4 ATS as well). Chicago has won both of its home games this season. Washington has a road record of 0-3 SU.

The Commanders were initially listed as a 1-point road favorite, but early betting changed that line. The total, which started at 40, has also decreased. This season, both offenses have had difficulties. Washington scores only 18.2 points per game on average, and the Bears have scored only 16.0 points per game overall. The Bears’ offense’s lone saving grace this season was that they have averaged 21 points a game in their two home contests.

After a back-and-forth game against Tennessee where they led by three points two different times, the Commanders had a chance to end their three-game losing streak last Sunday. Unfortunately for the Commanders, with just 13 seconds left in the contest, quarterback Carson Wentz threw an interception at the Titans’ two-yard line. Washington wound up losing to the Titans 21-17.

Wentz had a strong game overall, passing for 359 yards and two scores despite the final pick. Dyami Brown, a rookie selected in the third round of this year’s draft, caught both of Wentz’s scoring passes. Despite recent glimpses of its promise, Washington’s offense hasn’t surpassed 17 points since Week 2.

The Bears should be commended for coming back against the Minnesota Vikings on the road in the fourth quarter after falling behind 21-3. But, Chicago gave the Vikings too much time at the end of the fourth quarter.  In the second half, the Vikings’ offense seemed to drift off until scoring the game-winning touchdown with 2:26 remaining.

Chicago’s offense is still having trouble. In each of the previous four games, quarterback Justin Fields has increased the number of yards he has thrown for. Additionally, last week against the Vikings, he tossed his first touchdown since Week 1. Fields’ performance on Thursday will be crucial if the Bears are going to have a shot at getting a win.

The Commanders’ most recent ten games have seen them go 2-8 SU. They are 0-4 ATS in their last four games. However, in their last nine games against the Bears, the Commanders are 8-1 SU and 9-0 ATS. In Chicago’s previous eight games in primetime, the Bears have gone 0-8 SU and 1-7 ATS.