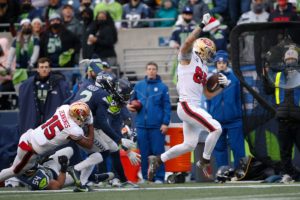 The San Francisco 49ers (9-4 SU, 8-5 ATS) will head to Seattle tonight in search of their seventh consecutive victory and an opportunity to clinch the NFC West title. The Seahawks lost at home to the 49ers, 27-7, in Week 2 as 8.5-point favorites. With three games left, a victory for the Niners tonight would give them a three-game lead in the division. Additionally, Seattle would not have the tiebreaker against San Francisco.

Both of these teams are going in different directions. San Francisco has won six straight games and is 5-1 against the spread in that time. Seattle has dropped three of its last four games and is 0-4 ATS.

Last week provided a snapshot of where each team is right now. Despite being a 4-point home favorite, Seattle lost to Carolina, while San Francisco destroyed the Tampa Bay Buccaneers 35-7. The 49ers’ victory was even more impressive given that rookie QB Brock Purdy was starting his first NFL game.

In San Francisco’s rout of Tampa Bay last week, Purdy got things going right away. The Niners led 28-0 at halftime after he completed two touchdown passes and added a rushing touchdown in the second quarter. Unfortunately, during an inside run in the second quarter, 49ers WR Deebo Samuel twisted his ankle severely, and it is expected that he will miss the rest of the regular season.

Running back Christian McCaffrey added two more touchdowns for San Francisco, one on a reception and the other on a third-quarter run that put the game out of reach. Samuel scored the game’s first touchdown in the first quarter on a 13-yard run. The 49ers’ defense made future Hall of Famer Tom Brady (two interceptions) look like a rookie in what was arguably his worst performance of the year.

Last Sunday’s game against the Panthers was a disaster for the Seahawks, who fell behind 17-0 and never really recovered. They were within 20-17 after kicker Jason Myers’ 27-yard field goal with 10 minutes left in the third quarter, but their defense failed to thwart Carolina’s rushing attack. On 46 carries, the Panthers gained 223 yards and scored two touchdowns.

Seattle trailed throughout the entire game and managed only 46 rushing yards. In the first game against the Niners this season, the Seahawks gave up 189 rushing yards and two touchdowns. That was before Christian McCaffrey was signed by the 49ers.

Seattle RB Kenneth Walker’s return would undoubtedly be advantageous, but Geno Smith’s quarterbacking continues to be the most crucial aspect of Seattle’s offense. In the last three games, Smith has thrown four of his eight interceptions this season. Smith needs to prevent turnovers if the Seahawks are to have any chance at pulling the upset.

During the Niners’ six-game winning streak, their defense hasn’t allowed more than 17 points. The last four games for the Seahawks have seen them surrender 28.5 points per game. The Over is 5-2 in San Francisco’s last seven games despite the strong defense. In Seattle’s last five games and in the last nine meetings between these two teams, the Over is 4-1.