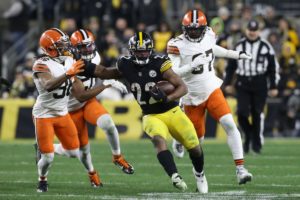 The Cleveland Browns (1-1, 1-1 ATS) will take on the Pittsburgh Steelers (1-1, 1-0-1) tonight as the home favorite. The Browns look to end a run of five consecutive losses against the spread. The Browns’ record against the spread in their last five games as a favorite is now 3-2 after their heartbreaking 31-30 loss to the New York Jets as 6.5-point home favorites last Sunday.

Against the Jets in Week 2, the Browns had trouble keeping track of the clock. With 1:55 left in the game, the Browns held a 30-17 lead. Joe Flacco, the veteran quarterback for the Jets, threw two touchdown passes in a span of less than one minute giving the Jets’ comeback victory. In the end, Flacco completed 26-of-44 passes for 307 yards and four touchdowns.

Nick Chubb was the primary offensive weapon for the Browns. Chubb carried the ball 37 times for a total of 184 yards and he scored three touchdowns. Chubb made a few mistakes in the Browns’ final scoring drive. Chubb would have been better suited staying in bounds during the drive so that more time could have been run off the clock. The Jets were left with an ample amount of time which eventually led to the upset.

Through their first two games, Pittsburgh’s offense has been a mess. They were able to secure the victory over the Cincinnati Bengals in Week 1 thanks to a defense that completely overpowered the opposition. During the opening victory of the season, the Steelers defense hounded Joe Burrow sacking him seven times and picking him off a total of four times.

Last week, Pittsburgh fell to New England 17-14. It wasn’t until a few minutes into the fourth quarter that the Steelers’ offense finally scored a touchdown. Starting quarterback Mitch Trubisky has yet to throw for more than 200 yards in a game this season. There have been rumblings that rookie Kenny Pickett ought to get some experience under his belt very soon.

The Steelers’ most significant issues include a running game that isn’t providing the desired results. Through the first two games, Najee Harris has only gained 72 yards on 25 carries. That won’t cut it against the Browns. T.J. Watt, the defending NFL Defensive Player of the Year, is out and is expected to miss at least four games due to his injury.

Pittsburgh’s defense has only allowed 37 points so far this season. It’s not surprising that the Under is 4-1 in the Steelers’ last five games. It’s a similar trend for Cleveland. The Under is 6-3 in the Browns’ previous nine games. In seven of the last nine games in the series, the Under has cashed a winning ticket.