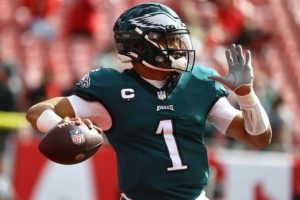 Tennessee’s Derrick Henry rushed for 219 yards and two touchdowns against the Texans last week in a 17-10 Houston loss. The Texans have now dropped two consecutive games while giving up more than 400 rushing yards.

Despite returning from a bye week, the Eagles didn’t miss a beat last week against the Steelers. Hurts completed 19-of-28 passes for 285 yards and four touchdowns as Pittsburgh never posed a serious threat. The Eagles’ offense amassed 401 total yards while not turning the ball over.

Despite the obvious mismatch between these two teams, covering a double-digit spread in the NFL is never easy. Only three times since 2000 has Philadelphia closed as double-digit away favorites. The Eagles have a 0-3 ATS record and two of those three games were straight-up losses.

The last four times Houston has been a double-digit home underdog, however, the Texans have gone 3-1 ATS. One of those contests was a straight-up victory for the Texans, who defeated the Chargers 41-29 at home last year. Houston will seek to contain Hurts and the Eagles’ rushing attack tonight. That will be easier said than done as Philadelphia averages 149.6 yards per game on the ground. That ranks sixth in the NFL.

The Texans will need to find a way to slow down Philadelphia after failing to stop Henry last week. Josh Jacobs of the Raiders and Henry were able to run for a total of 362 yards and five touchdowns over the past two weeks against the Houston defense. If Philadelphia runs the ball at will tonight, things might get difficult for the Texans.

Philadelphia is 5-1 SU and ATS in its previous six road games. In each of the previous five contests between the two clubs, the Eagles have defeated the Texans. In its previous six games, Houston is 1-5 SU, and in its last 11 at home, it is 1-9-1 SU.

Houston is 30th in the NFL in third-down conversion rate and 31st on first down. The Texans struggle to score. In six of the 19 games that Houston QB Davis Mills has started, the Texans’ offense has failed to score. Two of those games have come this season.