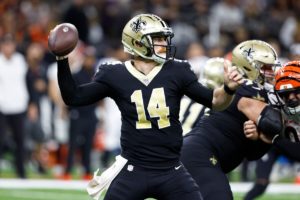 The Arizona Cardinals (2-4 SU, 3-3 ATS) take on the New Orleans Saints (2-4, 2-4) tonight in Week 7. The Cardinals will attempt to end a two-game losing streak and claim their first home victory of the year as modest 2.5-point home favorites. The Cardinals have lost their last eight straight games at State Farm Stadium and they have gone 1-7 against the spread in those games.

The game’s line and total shifted throughout the week due to the possibility that Arizona wide receiver Marquise Brown suffered a season-ending foot injury in last Sunday’s 19-9 loss to the Seattle Seahawks. Brown had been the team’s leading receiver with 43 catches for 485 yards and three touchdowns. Brown had stepped up while DeAndre Hopkins was still serving his six-game suspension.

This week, Hopkins is expected to return, which should offset the potential loss of Brown. The Cardinals also acquired disgruntled wide receiver Robbie Anderson from the Carolina Panthers on Monday in an effort to bolster the offense.

The Saints led the Cincinnati Bengals throughout most of their game last week. With just under two minutes left, two ex-LSU Tigers finished off New Orleans when they combined on a 60-yard touchdown pass. Cincinnati QB Joe Burrow and WR Ja’Marr Chase were members of the 2019 LSU team that won the national title at Superdome.

The Saints are dealing with a number of injuries, particularly at the quarterback position where both starter Jameis Winston and backup Andy Dalton were questionable before being upgraded to probable for tonight. With Winston and Dalton on the shelf, Taysom Hill started the last three games at quarterback for the Saints. The top three wide receivers for New Orleans, Michael Thomas, Jarvis Landry, and Chris Olave, did not play last week. Olave is listed as probable, but Thomas and Landry are both out tonight.

The Cardinals will need to find a way to score more than 20 points if they want to have a chance to win tonight. Despite being underdogs in each game, the Cardinals averaged 27.5 points in their two victories this season. Kyler Murray, the quarterback, should be revitalized by Hopkins’ return and the arrival of Anderson. Murray has been forced to run more – 26 carries for 168 yards in the last three games – as defenses pressure him more often.

In their last six games, the Saints have a 2-4 ATS record. The Saints have won five of the previous seven games in the series, and they are 8-3 ATS in their last 11 games versus Arizona. Arizona has had trouble covering the spread in its last 12 games, finishing 4-8 ATS.