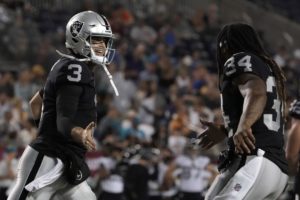 It’s an interesting storyline tonight as Bill Belichick and the New England Patriots head to Las Vegas to take on his former offensive coordinator, Josh McDaniels, and the Raiders. McDaniels was a long-time assistant with the Patriots and he gets his second crack at being an NFL head coach. His first stint in Denver didn’t go so well, but McDaniels is off to a good start in the preseason.

The former Patriots coach and his Raiders are 3-0 so far this preseason. The Raiders played in the Hall of Fame game to start the preseason. They beat Jacksonville and then followed that up with a win over Minnesota. Last week, the Raiders beat Miami 15-13. McDaniels would surely like to go 4-0 to give his team some momentum heading into the regular season. He would almost surely like to beat his mentor too, even if it is just the preseason.

Belichick has been doing this long enough – this is his 48th NFL season – to understand that the preseason just doesn’t matter all that much. There are no incentives involved for winning preseason games. There is no preseason Super Bowl. If you go 4-0 in the preseason, great. If you end up 0-3, that really doesn’t matter. What matters is that coaches build their roster and stay healthy.

Patriots QB Mac Jones will likely stay healthy tonight. He probably won’t play. Jones threw eight passes in the Patriots’ 20-10 win over Carolina last week. That was enough for Belichick. He doesn’t need to see any more from his starting quarterback. Veteran Brian Hoyer and rookie Bailey Zappe will run the offense for New England tonight.

On the other sideline, the Raiders aren’t likely to play any starters either. McDaniels has seen enough of his best and doesn’t need to risk an injury. That means Raiders QB Derek Carr isn’t likely to play nor is WR Davante Adams. At quarterback, McDaniels will go with former Patriots draft pick Jarrett Stidham and Chase Garbers. Those two will battle it out to become Carr’s backup.

New England has won eight of its last 11 games on the road. The Patriots are also 10-4 ATS in their last 14 games overall. Belichick’s team has scored 21 and 20 points in its two preseason games so far this year. That is significant since the total has gone Over in five of the Patriots’ last six games.

Las Vegas has been fairly successful as of late too. Don’t forget, the Raiders were a playoff team last year. They are now 7-1 SU in their last eight games and have covered the spread in six of their last seven games. In their last five games at home, Las Vegas is 4-1 ATS. In the preseason this year, the Raiders are averaging just a shade less than 23 points per game. The last eight times these two teams have played, the Patriots are 7-1 SU and 5-2-1 ATS. The Under is 5-3 in those eight games.