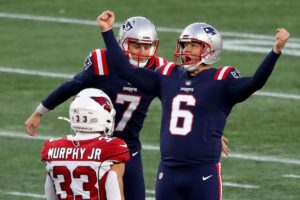 The Arizona Cardinals (4-8 SU, 6-6 ATS) host the New England Patriots (6-6, 6-5-1) as slight home underdogs on Monday Night Football following their bye week. Tonight’s game is practically a must-win for both teams’ chances of making the postseason. The Cardinals will likely need to win out to have any chance of making the NFC playoffs after having lost four of their previous five games. The Patriots cannot afford to have their losing streak extend to three straight games.

The offense in New England still appears to be a problem. Only one of their previous five games—a 33-26 loss to the Minnesota Vikings on Thanksgiving night—saw the total go OVER. In that game, the Patriots’ defense failed them. Although they have won six of their last nine games, the offense has struggled. According to Patriots head coach Bill Belichick, it is just too difficult to make significant schematic changes at this point in the season. The Patriots’ offense has been wildly inconsistent this season.

New England QB Mac Jones reportedly wanted deeper pass plays to be called during last Thursday’s 24-10 home loss to the Buffalo Bills. That sparked his sideline outburst. He threw for a career-high 382 yards and two touchdowns the week before against Minnesota, but his team traded points all game long in an uncharacteristically high-scoring game.

The Cardinals can still put together a strong finish, but under head coach Kliff Kingsbury, they haven’t usually done that. The Cardinals have struggled in the second half of seasons since Kingsbury took over as coach in 2019.

Arizona has only made it to the postseason once in its four seasons under Kingsbury, losing to the eventual Super Bowl champion Los Angeles Rams in the wild-card round of the playoffs last year. Last year, the Cardinals also dropped four of their final five games of the regular season yet still made the playoffs.

Several of Arizona’s key players were able to get healthy during the bye week. In Week 12, wide receiver Marquise Brown had six catches for 42 yards after just recovering from a foot injury. Kyler Murray, the quarterback, should also be healthier and ready to go.

New England’s playoff potential will be strongly tested over the course of the next three games. Until Week 17 when they host the Miami Dolphins, they won’t face another opponent from AFC East. The Patriots will have a good chance of returning to the postseason if they can manage to win all three games before taking on the Dolphins.

For the Cardinals, Murray may be the key. Running quarterbacks have a history of giving the Patriots problems. Josh Allen of Buffalo, Justin Fields of Chicago, and former MVP Lamar Jackson of Baltimore have all excelled against New England.

In their last eight meetings with Arizona, the Patriots are 7-1 SU and ATS. The biggest mismatch on Monday night is that between Belichick and Kingsbury on the sidelines. The Cardinals are just 1-4 SU in their last five games and 1-11 SU in their last 12 at home.