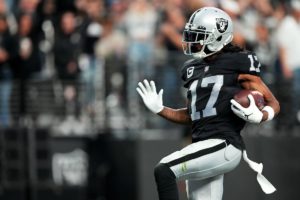 In this week’s Thursday night NFL game, the struggling Los Angeles Rams (3-9, 3-8-1) will host the Las Vegas Raiders (5-7 SU, 6-6 ATS). The Raiders will try to win their fourth straight game and are a big favorite on the road heading into tonight’s game. That shouldn’t surprise anyone. The defending Super Bowl champion Rams are struggling and are currently riding a season-high six-game losing streak as a result of injuries.

The Raiders beat AFC West Division foe the Chargers last week 27-20. Las Vegas had suffered through a second three-game losing streak prior to winning their last three. The Raiders are 3-0 both straight up and against the spread in their last three games. Two of the victories came when the Raiders were the underdog.

What was once a very explosive Rams offense has been utterly destroyed by injuries. In the loss to Seattle, running back Cam Akers, who had been more or less an afterthought in the Rams’ offense, scored two touchdowns. Of course, the quarterback position, where Matthew Stafford is currently on injured reserve, is the bigger problem. That leaves John Wolford, who threw two interceptions last week, in charge of the offense. If Wolford is unable to lead the offense, Bryce Perkins might see time too. Perkins has played in place of Wolford this season.

The Rams have one of the worst offenses in the NFL. They are 31st in rushing yards and 29th in points scored per game (16.2). Cooper Kupp, the Super Bowl MVP, has been sidelined with an ankle injury and is likely done for the year. Aaron Donald, a three-time NFL Defensive Player of the Year, also has an ankle problem. For the first time in his career, he missed a game last week. He will not play tonight.

Las Vegas QB Derek Carr and WR Davante Adams are big concerns for the Rams. Last week, the ex-college teammates connected on two long touchdown passes. The Rams also will need to devise an offensive strategy to score some points.

The Under is 4-2 in the last six games between these two teams. The Under has cashed in four of the last six Raiders games. Surprisingly, the Over is 4-2 in the Rams’ last six games. In the last three head-to-head meetings, the Rams have won twice, covered all three, and limited the Raiders to just 9.7 points a game. That will be a tough task to repeat with so many defensive starters out.