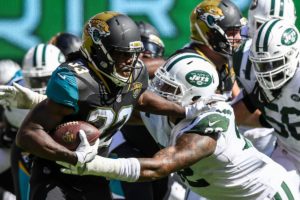 The Jacksonville Jaguars (6-8 SU, 6-8 ATS) travel to New York to face the Jets (7-7, 8-6) in this week’s Thursday night NFL game.  The Jags are looking to make it three straight wins after impressive victories over Tennessee and Dallas.  The Jaguars, who were 4-point home underdogs last week, pulled off an incredible 40-34 overtime victory over the Dallas Cowboys after coming back from a 27-10 deficit in the third quarter.

The quarterback matchup in this game is an interesting one since it features the first and second overall picks in the 2021 NFL Draft – Trevor Lawrence of Jacksonville and Zach Wilson of New York. The pair faced each other last season. In Week 16 of the 2021 season, Wilson’s Jets defeated Lawrence’s Jaguars 26-21 while covering as 2.5-point home favorites.

The Jaguars overcame a double-digit deficit and won despite the odds being stacked against them for the third time in their last six games. After losing five straight games, the Jags have now closed as underdogs in six straight games. Jacksonville has managed to win four of them. With quarterback Mike White out of the lineup, New York’s offense is not the same, giving Jacksonville a slight advantage.

White replaced Wilson under center when the second-year Jets quarterback struggled. White provided some spark to the Jets’ offense, but he is still battling rib fractures. If the Jacksonville defense plays as it did a week ago, the Jags should be in pretty good shape. The Jags’ defense scored the game-winning touchdown last Sunday after intercepting Dallas quarterback Dak Prescott in overtime.

Wilson threw for 317 yards against the Detroit Lions last week and that appeared to be sufficient to win the game. But, Wilson threw a costly interception early in the third quarter that was directly responsible for the game-winning field goal by Detroit. It didn’t help that Jets running backs Michael Carter and Zonovan Knight combined to rush for only 38 yards on 17 carries.

In a 36-22 rout of the Tennessee Titans two weeks ago, Jacksonville recorded just its second road win of the season. The Jags need to continue what they have done the last two weeks to have a shot at beating New York. The Jets will need Wilson to step up and not make mistakes. New York’s running game also needs to work to take some pressure off of Wilson.

The total dropped to 38.5 in early betting action, but rose to 42 before returning to its current 37. Jacksonville’s offense has put up 76 points over the past two games. The Jags’ last four in a row have gone Over. The last five Jags-Jets games have gone Over the game total.

The Jets are 1-4 SU in their last five games. Jacksonville is 4-2 SU and ATS in its last six games. The Jags are just 2-18 SU in their last 20 games on the road. Temperatures are expected to be cold in New York on Thursday night and there could be some rain or even snow.