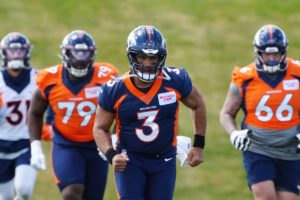 The NFL schedule makers definitely had this in mind when they scheduled Denver and Seattle for tonight’s first Monday night matchup of the season. New Broncos quarterback Russell Wilson will suit up against his former team in prime time to finish Week 1 of the 2022 NFL season. Wilson played his first 10 NFL seasons as a Seahawk and led Seattle to its only Super Bowl win in franchise history. Now, he’ll play for Denver after being traded in the offseason.

Wilson will go up against his former backup Geno Smith. When Wilson was injured last season, Smith stepped in and played well. He only went 1-2, but he did go up against three of the better defenses – Rams, Steelers, and Saints – in the NFL. Smith also had a great preseason, which is why he is the Seahawks starter, not Drew Lock. Lock was acquired by Seattle in the trade for Wilson.

With the acquisition of Wilson, Denver immediately became a betting favorite in a number of futures categories. The Broncos are among the favorites to win the AFC West, the AFC, and the Super Bowl. Wilson will transform what was a sluggish offense in Denver last season. The Broncos only averaged 19.7 points per game in 2021. That ranked 23rd among NFL offenses.

The Denver defense might not be the same as a year ago. It is essentially the same unit, but with Vic Fangio, the Broncos’ former head coach, gone the Broncos might stumble a little. Fangio is recognized as one of the defensive gurus in the NFL. That’s part of the reason why Denver was No. 3 in scoring defense last year allowing opponents 18.9 points per game. The Broncos’ defense added pass-rushing DE Randy Gregory to an already outstanding group. Whether they play at the same level without Fangio remains to be seen.

Historically, Week 1 road favorites in the NFL have not done all that well against the spread. Over the past 10 NFL seasons, road favorites are just 5-8 ATS in the first week of a new season. The Broncos are favored by seven tonight at Lumen Field in Seattle. Since 2002, road favorites of at least -6 on Monday Night Football are 19-21 ATS.

Wilson has struggled too as a road favorite. In his career, Wilson is 13-16-2 ATS as a road favorite of four or more points. Since the 2016 season, he’s only 4-11 ATS in that role. Denver has won 13 of the last 18 games it has played against Seattle. The last 14 times these two teams have played in Seattle the Under has hit 10 times. The Under is 4-0 in Denver’s last four Monday night games and 10-4 in Seattle’s last 14 on Monday night. The last ten times the two teams have played the total has gone Over seven times. The teams haven’t played since 2018. Denver won 27-24 at home and the total went Over.