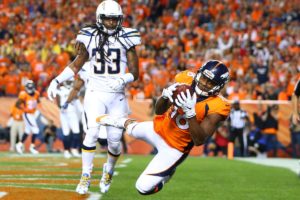 With the benefit of a lengthy layoff, the Denver Broncos (2-3 SU, 1-4 ATS) will travel to face the Los Angeles Chargers (3-2, 4-1) on Monday Night Football in Week 6. Denver has a three-day head start on the Chargers following the Broncos’ demoralizing 12-9 overtime loss to the Indianapolis Colts as 3-point home favorites in the Week 5 Thursday Night Football contest.

Rest aside, Denver’s health could play a huge role in tonight’s game. The extra time off was definitely needed by the Broncos as several key players are banged up. Don’t forget, running back Javonte Williams is out for the season due to an injured ACL, while quarterback Russell Wilson is dealing with a partially torn lat muscle.

Wilson is anticipated to play through the injury, although his team’s odds have not improved as a result. Los Angeles opened as a -4.5 favorite with the total is currently set at 45.5. That opening point spread has not changed. Tonight’s game could be another low-scoring game in prime time with the defenses taking center stage.

Wilson’s injury may be the obvious explanation for Denver’s failure to score touchdowns, but the Broncos have had more than their fair share of opportunities to do so. Simply put, the Denver offense has been awful. The Broncos rank 31st in the NFL in scoring averaging a measly 15 points per game.

In last week’s setback to the Colts, Wilson threw an interception with 2:13 remaining in regulation. That came after failing twice inside the Colts’ 15-yard line. He also failed on a fourth-and-one at the Indianapolis five-yard line in overtime. It was exactly those types of situations that prompted Denver to go all-in and trade for Wilson in the offseason. So far, the move has not paid off.

In their 30-28 victory against Cleveland last week, the Chargers faced their own difficulties on a fourth down. With just over a minute left, head coach Brandon Staley decided against punting when facing a fourth-and-one at his team’s 46-yard line. The Chargers failed to convert and the Browns had plenty of time to get the go-ahead score. Thankfully for the Chargers, Cleveland missed a field goal attempt from 54 yards out that would have won the game.

Nathaniel Hackett, the first-year head coach of the Broncos, has faced harsh criticism for some of his decisions this season. He, along with Wilson, were supposed to revive a Denver offense that has been far from good for the last several years. That has yet to happen.

As a result of their inadequate offense and stellar defense, the Broncos have seen the Under hit in four of their five games so far this season. In the Chargers’ previous 11 games, the Over is 9-2, and in their last six at home, the Over is 5-1. However, in the last nine games of the series against Denver, the Under is 6-3.