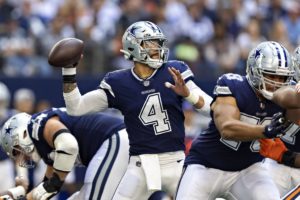 The Tennessee Titans (7-8 SU, 8-6-1 ATS) are still fighting for a playoff spot and will take on the Dallas Cowboys (11-4, 9-6) tonight as home underdogs in an effort to snap a five-game losing streak. Last week, the Titans suffered a tough 19-14 loss to the AFC South last-place Houston Texans.  That dropped the Titans into a first-place tie with the Jacksonville Jaguars atop the division.

Titans QB Ryan Tannehill remains out and Tennessee looked awful without him. The drop-off from Tannehill to rookie Malik Willis proved to be too much to overcome against the Texans as Willis completed just 14-of-23 passes for 99 yards, no touchdowns, and two interceptions.

The Cowboys still have a slim chance of winning the NFC East and earning the top seed in the conference, but they will need assistance in the final two games to get there. Despite defeating the Eagles 40-34 last week as 4-point home favorites, the Cowboys still trail Philadelphia in the standings. The Minnesota Vikings are ahead of Dallas in the race for the NFC’s top seed.

If the playoffs started today, Dallas would face Tampa Bay. That might be the best possible scenario for the Cowboys besides getting a bye as the top seed.  Dallas may not be as motivated as the Titans here on a Thursday night late in the season.

With a 7-3 record at the time, it appeared as though the Titans would easily win the AFC South after upsetting the Green Bay Packers 27-17 on Monday night in Week 11. Then, the wheels started falling off the bus. Offensive coordinator Todd Downing got a DUI. Then, after losing to Philadelphia, GM Jon Robinson was fired.

Tannehill also played through that period with an ankle injury and did everything in his power to stay on the field before deciding to have what is anticipated to be season-ending surgery. Willis is getting the chance to demonstrate his abilities, but it is clear that he still has a ways to go before he can be considered a reliable starter.

Tennessee’s offensive game is a one-trick pony without Tannehill because the team’s only real chance to win is by running the ball. Derrick Henry, one of the best running backs in the NFL, needs to get more touches this week. Henry has 1,429 yards rushing and 13 touchdowns this season.

Dallas is 5-1 SU in its last six games and the Cowboys are 11-4 ATS in their last 15 road games. On the road at Tennessee, Dallas is 4-1 ATS in its last five trips. In addition to losing five straight, the Titans are 0-4-1 ATS in those five games.