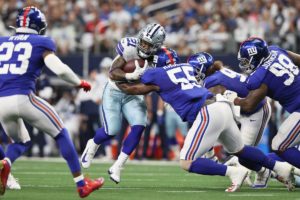 The New York Giants will be aiming for their first 3-0 start since 2009 when they take on the Dallas Cowboys in an NFC East game on Monday night in East Rutherford, New Jersey. Brian Daboll, the team’s new coach, guided New York to two straight victories to start the season for the first time since 2016. The team overcame Tennessee in the season opener thanks to a gutsy two-point conversion, and New York beat Carolina with a late field goal last week. The Giants have won both of their games by a combined four points.

The Giants’ matchup on Monday night against the Cowboys (1-1) will be yet another barometer for success. Dak Prescott, the star quarterback for Dallas, will miss another game because of a fractured thumb. Cooper Rush, who is currently 2-0 as the Cowboys’ starter, has another chance to improve his record.

The Giants have lost nine of the last ten games against the Cowboys, including both games last year. The trend needs to be broken, and to do so New York must find a way to stop Micah Parsons, the star linebacker for the Cowboys. Parsons was tied for the league lead in sacks with four heading into Week 3. Parsons has recorded two sacks in each of Dallas’ games this season. The second-year pro has 17 sacks in his 18 career games. Last year, he won the NFL Defensive Rookie of the Year.

Dallas’ 20-17 victory over the AFC champion Cincinnati Bengals last week was largely due to Parsons and the Cowboys’ defense. The Cowboys put pressure on Bengals standout QB Joe Burrow the whole game. Dallas recorded a total of six sacks on Burrow and flustered him all game long.

Rush threw for 235 yards, one touchdown, and no interceptions on 19-of-31 attempts in the win. The Cowboys’ game-winning drive, which he orchestrated, ended with a 50-yard field goal by Brett Maher with a matter of seconds left. Rush’s performance does not surprise Dallas head coach Mike McCarthy. Rush has done it before.

Last year, Prescott missed a game against Minnesota. Rush stepped in and threw for 325 yards and two touchdowns leading the Cowboys to a victory. The Dallas quarterback may need to do a little more, though, as his Cowboys are currently averaging just 11.5 points per game. That ranks 31st in the NFL.

Daniel Jones, the quarterback for the Giants, is on the opposite end. He has thrown three touchdown passes for 364 yards and one interception. Star running back Saquon Barkley leads the NFL with 236 rushing yards. His ability to run the ball takes some of the pressure off of Jones.

Dallas is 8-2 ATS in its previous 10 games versus the Giants in addition to winning nine of those 10. The Cowboys have an overall record of 13-6 SU and 14-6 ATS over their last 20 games. In their last eight games, the Giants are 2-6 ATS.