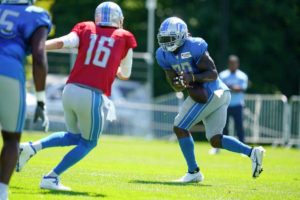 Analysis: The Indianapolis Colts wrapped up two days of joint practices with the Detroit Lions and neither team is expected to play their starters in Saturday’s preseason affair.  Indianapolis head coach Frank Reich made that fact clear following Thursday’s joint practice.  “There might be one or two exceptions to that to where we think we need to because of depth and how many guys have to play, but for the most part, the ones will not play,” said Reich.

Veteran quarterback Matt Ryan has brought a much-needed level of professionalism, leadership, and seriousness of purpose to the Colts’ locker room.  “Urgency. Attention to detail,” General Manager Chris Ballard said of what Ryan brings to the team.  “There’s no detail he leaves out, ever, in anything we’re doing.  And a guy that’s been in the league as long as he has and has been as close to touching the prize as you can get without getting it, you can definitely feel the sense of urgency from him, and he definitely makes sure everybody else feels it.”

Indianapolis also has excellent depth at quarterback with veteran Nick Foles backing up Ryan.  According to Reich, Foles will play about a quarter, Sam Ehlinger will play for a quarter or quarter-and-a-half and Jack Coach will wrap up the contest on Saturday.  Reports suggest that Ehlinger has looked impressive in practice following a strong debut in Week One against the Bills.

In contrast, the Lions lack talent under center with Tim Boyle and David Blough backing up Jared Goff.  Boyle and Blough both struggled in Week One’s loss to Atlanta. Boyle was 9-for-16 for 111 yards, a touchdown, and an interception.  Blough was 18-for-28 for 141 yards but had a pass deflected and nearly intercepted in his own end zone with 3:42 left before his late fumble.

The Colts were one of two NFL teams that averaged a positive EPA per play in the running game during the 2021 regular season and the ground game looks just as strong this season. Finally, the top half of the Colts’ 53-man roster is locked in for the regular season but the backend remains open with significant competition at several critical positions.  Saturday’s game presents make-or-break opportunities for the young players on the Colts’ roster.  Grab the points with Indianapolis and invest with confidence.