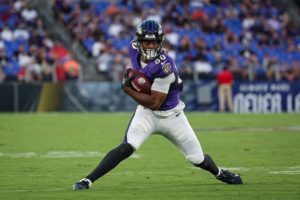 Analysis: The Ravens came away with a 23-10 win over the Tennessee Titans last weekend, and the Cardinals opened their preseason with a 36-23 win over the Cincinnati Bengals.  Baltimore starting quarterback Lamar Jackson will not play in tonight’s game and will likely be held out of next week’s preseason finale as well.  Baltimore head coach John Harbaugh also stated that tight end Mark Andrews will be held out along with other starters.  Andrews led the team in receptions (107), yards (1,316) and touchdowns (nine) last year.  Andrews’ 12.7 yards per reception were second on the team behind only Sammy Watkins’ 14.6.

Arizona starting quarterback Kyler Murray did not take the field last weekend and recently returned to practice following a positive COVID test.  Murray will not see the field tonight as backups Trace McSorley and Jarrett Guarantano will likely split reps as they did in Week One.  McSorley, a former Raven, is vying for the No. 3 spot on the depth chart and was 13-for-22 for 163 yards and a touchdown against Cincinnati.  No. 2 quarterback Colt McCoy remains sidelined with an injury.

Baltimore head coach John Harbaugh is 21-0 SU and 19-2 ATS in preseason games, marking the longest winning streak in league history. The Green Bay Packers (1959-62) had the previous record with 19 consecutive exhibition victories.  Baltimore’s last preseason loss was on September 3, 2015, a 20-19 defeat to the Atlanta Falcons.  “I think it’s a testament to [current general manager] Eric DeCosta, Harbs [John Harbaugh] and [former GM] Ozzie Newsome and the way they build the roster,” said kicker Justin Tucker.  “Our 90-man roster has really, really good depth.  All those guys can legitimately play.”

Backup quarterback Tyler Huntley looked excellent against the Titans last Thursday, completing 16-of-18 passes for 110 yards and a touchdown.  “Tyler played great. His numbers were off the charts,” Harbaugh said. “He really ran the offense well. Timing was really good in the passing game.  I thought the o-line looked pretty good.”  I was also impressed with Anthony Brown, who relieved Huntley and went 10-of-15 for 117 yards. Meanwhile, rookie punter Jordan Stout averaged 47.8 yards on four punts.

With Arizona standing at 28.6% ATS following a win and 37.5% ATS as underdogs over the last five preseasons, lay the points with the Ravens and invest with confidence.