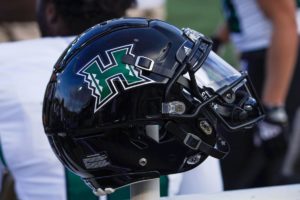 My math model only favors Vanderbilt by 1.02 points in this game, but the sharp money has been backing the Commodores since the line was posted. I can certainly understand why people are dubious of Hawaii this season as the program is in full transition with just six returning starters and a new head coach in Timmy Chang.

Chang’s highest level of coaching experience was as a position coach for Nevada from 2017-21 and the Rainbow Warriors return the second lowest on-field production in the country. During his five-year career from 2000-04, Chang amassed 17,072 passing yards and 117 touchdowns and became one of the most beloved players in school history.

Chang made a very good hire in offensive coordinator, Ian Shoemaker, whose offenses in parts of three seasons at Eastern Washington were among the most explosive in FCS, averaging 537.1 yards and 41.3 points per game.  The new defensive coordinator is Jacob Yoro, who has been on Hawaii’s staff since 2017 as a defensive coach.  Hawaii is 3-9-1 straight-up versus current SEC teams and Saturday marks the first time the Rainbow Warriors are hosting an SEC school since 2003 when Alabama came to Honolulu.

Vanderbilt head coach Clark Lea stated in July that “in time Vanderbilt will be the best program in the country,” but the Commodores are 5-28 in the past three seasons. Only one of those three wins was by more than seven points and the Commodores were 2-10 in Lea’s inaugural season, with narrow wins over Colorado State and Connecticut.  One of Vanderbilt’s ten losses came against an FCS team.

Vanderbilt covered the spread in its last four games last season and has the second-longest active ATS winning streak in the nation. Since 2004, college football teams that ended the previous season covering four or more consecutive games are just 43-66 ATS in season-openers, including 30-47 ATS since 2010 and 3-10 ATS since September 1, 2019. It’s also worth noting that the under is 22-11-2 in these contests since 2017, including 8-2 since September 8, 2020.

Since 2013, Week 0/1 college football road favorites are just 30-45 ATS, which is significantly worse than when these same favorites are at home or on a neutral field (140-123 ATS; 53.2%). Since 2005, teams playing their first game of the season on the road against Hawaii are 4-5 SU and 1-7-1 ATS. Finally, the Rainbow Warriors are 9-1 ATS in their last ten season-openers. Take Hawaii and invest with confidence.

Words of Caution: Vanderbilt is 12-3 SU and 10-5 ATS since 1980 as non-conference road favorites, including 8-1 SU and ATS as a favorite of 8 or fewer points (check the line). The Commodores traveled to Hawaii about one week early so that they could get acclimated to the five hour time difference.