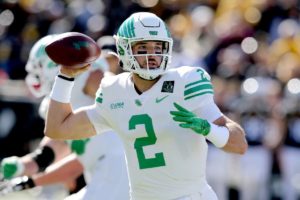 Analysis: North Texas returns from a misleading 44-34 loss to Memphis in which the Mean Green outgained the Tigers 6.2 yards per play to 5.0 yards per play.  Memphis benefitted from two non-offensive touchdowns and was outgained by over 120 yards.  That loss provides us with line value as my math model only favors Memphis by 2.62 points and the home team is 5-1 SU and ATS in the past six meetings in this series.  Let’s also note that North Texas has won five of the last 7 straight-up.

Florida Atlantic is traveling for the second consecutive week and is just 2-10 SU away from home under head coach Willie Taggart.  North Texas possesses a potent attack that is ranked 30th in total offense (in the FBS) and 52nd in overall offense, per Pro Football Focus (PFF).  The Mean Green’s ground attack ranks in the top 50 nationally in almost every significant metric and is led by the dynamic duo of Ayo Adeyi and Oscar Adaway III.

North Texas head coach Seth Littrell has done a tremendous job in Denton, taking over a 1-11 team and taking them to a bowl game the following season.  North Texas has been to five bowls during Littrell’s six-year tenure and finished the 2022 campaign with five consecutive wins, including the program’s second-ever win versus a ranked opponent (UTSA).  The Mean Green rank 21st in the nation in returning production (74%) and were 6-2 ATS versus conference opponents last season.  Grab the points with North Texas and invest with confidence.

Analysis: The betting market has undervalued Buffalo for the third consecutive week as my math model favors the Bulls by 3.3 points in this game and the home team has covered five straight in this series.  Buffalo has been underrated since its 37-31 loss to Holy Cross in Week 2 where the Crusaders scored a touchdown on the final play of the game (Matthew Sluka threw a 46-yard touchdown pass to Jalen Coker).

Holy Cross was ranked No. 15 in the FCS Coaches Poll at the time and is currently No. 11 with a 4-0 record.  The Crusaders, who defeated Connecticut 38-21 in their 2021 season opener, are one of the best FCS teams in the country but the market doesn’t take that fact into account when rating Buffalo.

Buffalo ranks 116th in returning production but head coach Maurice Linguist utilized the transfer portal to upgrade the roster’s talent, especially along the offensive line and in the defensive backfield.  247Sports ranked Buffalo 30th in the nation in its preseason transfer portal rankings and the Bulls enter off a dominating 50-31 win over Eastern Michigan as 6.5-point underdogs.  Buffalo outgained the Eagles 498-327 (+13 FD margin) and finished with a 38:37 to 21:23 time of possession advantage.

Miami Ohio enters off a 17-14 upset over Northwestern in which the RedHawks were outgained (364-278) but benefitted from a plus-2 turnover margin.  Miami Ohio possesses an anemic attack that ranks 119th in total offense, 114th in scoring offense and 123rd in passing offense.  Starting quarterback Brett Gabbert suffered a season-ending injury in Week 1 against Kentucky (completed 20 of 28 passes for 166 yards before leaving the game) and backup quarterback Aveon Smith has averaged just 89 passing yards per game versus FBS foes.