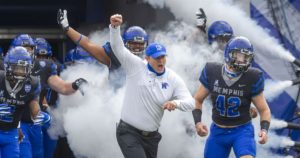 When Memphis faces struggling Tulsa in American Athletic Conference action on Thursday, it will be looking to snap a four-game losing streak. The Tigers dropped a 35-28 decision to No. 25 UCF last week. The loss gives Memphis its longest losing streak since 2013. Memphis is now 4-5 and 2-4 in AAC play.

Tulsa also lost to a ranked opponent last week. The Hurricane fell behind 17-3 to No. 19 Tulane and lost 27-13. Tulsa is now 3-6 overall and 1-4 in the conference. The Golden Hurricane has just one win in their last six games and that came against Temple, which has an identical record to Tulsa.

Seth Henigan, the quarterback for Memphis, has thrown six touchdown passes over the last three games while also throwing two interceptions. He completed 26 of his 39 passes for 284 yards and a touchdown on Saturday against UCF. The big problem for the Tigers was Golden Knights’ running back Isaiah Bowser who ran for 427 yards and four touchdowns against the Tigers. Memphis cannot allow Tulsa to have that kind of success running the football.

Tulsa will need to play considerably better on both sides of the ball against Memphis after a dismal performance against Tulane last week. Braylon Braxton, who started in place of QB Davis Brin because of an injured right ankle, completed 13-of-25 passes for 146 yards and a touchdown. Tulsa head coach Philip Montgomery said that a decision will be made about Brin’s availability for Thursday’s game closer to kickoff. Tulsa was outgained 482 to 257 in the loss to Tulane. Like Memphis, the Golden Hurricane struggled against the run allowing the Green Wave 357 rushing yards on 53 carries. That was an average of 6.7 yards per carry.

The short week could be a factor for both teams. In last year’s head-to-head meeting, the Golden Hurricane ended a three-game losing streak against the Tigers by defeating Memphis 35-29. Memphis still maintains a lead in the overall series at 19-12.