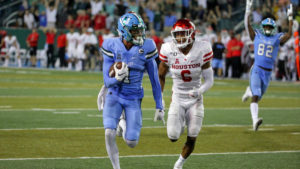 Despite Houston (2-2) splitting its first four games of the season, Cougars head coach Dana Holgorsen wants to see an overall improvement from his team. Houston began the season ranked No. 24 in the nation. The Cougars beat UTSA 37-35 in three overtimes but ever since Houston has been having some issues. Now, there may be some conflict within the program.

When they play Tulane (3-1) in the American Athletic Conference opener on Friday night, the Cougars will try to address some of those issues. In his fourth season as the head coach of Houston, Holgorsen is having a difficult time. The Cougars got past Rice last week 34-27. It shouldn’t have been that close. Houston and Holgorsen have long been known for their high-flying offenses. So far this season, it has been the defense that has saved the Cougars.

In the win over Rice, Nelson Ceaser scored after returning a fumble 11 yards for a touchdown with the score tied at 27-27. On the following series, Thabo Mwaniki intercepted a tipped pass to help secure the victory over the Owls.

The Green Wave, a two-touchdown underdog at Kansas State two weeks ago, shocked the Wildcats 17-10 on September 17. It was a huge win for Tulane, but the joy of the 3-0 start was short-lived after Southern Mississippi defeated them at home last weekend, 27-24. Running back Tyjae Spears of Tulane gained 114 yards on the ground and two touchdowns while also catching five catches for 74 yards. However, it was insufficient to prevent the Golden Eagles from winning.

Despite the loss, Tulane is 3-1 to begin a season for the first time since 2019. Green Wave head coach Willie Fritz believes his program can take the next step and enjoy eight-, nine-, and 10-win seasons. He’ll have to get by Houston tonight to have a shot at doing so in 2022. Houston holds a 19-7 advantage in the series and has won the last two in a row, both by 18 points.

Tulane is only 4-10 SU in its last 14 games. They have not done well on the road overall winning just once in their last seven road games. That road win, the one over Kansas State, was a big one though. In their last 18 games against Houston, Tulane is 3-15 SU and 4-13-1 ATS. In their last six games overall, the Green Wave is 5-1 ATS.