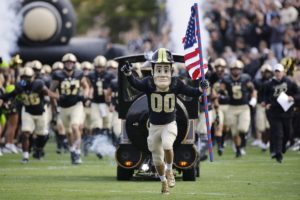 For the seventh straight season, Penn State will open its Big Ten season on the road. This year, it’s at Purdue which is coming off a 9-4 season and a big bowl win over Tennessee. Penn State struggled last year and wound up 7-6, equaling the record of head coach James Franklin’s first two seasons in Happy Valley. Franklin, and his players and coaching staff, would love nothing more than to start the 2022 campaign with a conference victory.

Interestingly, tonight’s matchup will feature two sixth-year quarterbacks. Sean Clifford, who limped through last season with injuries, is back for the Nittany Lions. Clifford threw for over 3,100 yards and 21 touchdowns last season and has been entrenched as the Penn State starter for the last three seasons.

On the other end, Purdue has Aidan O’Connell who lit up opponents last year for 3,712 yards and 28 touchdowns. His 71.6 completion percentage was the sixth-best in the country and O’Connell ended 2021 with the fifth-best QB rating. The Purdue offense lost star WR David Bell to the NFL, but they got Iowa transfers Charlie Jones and Tyrone Tracy. O’Connell actually played with Jones when the two were youths in the Chicago suburbs.

Clifford also lost a great receiver – Jahan Dotson – to the NFL. The Penn State quarterback will also rely on a transfer to pick up the receiving slack. Mitchell Tinsley transferred in from Western Kentucky where he had 87 catches for 1,402 yards and 14 touchdowns last season. Tinsley’s numbers were among the best in the nation. His touchdown number was fifth and he finished eighth in receiving yards.

There is no question that what will carry Penn State in 2022 is its defense. The Nittany Lions lost their top two tacklers, but they return an abundance of talent. Purdue is hopeful that tonight’s game doesn’t end up like the last time the two teams met in 2019. The Penn State defense wound up with 10 sacks and held the Boilermakers to 104 total yards, including minus-19 rushing yards.

The difference in the game could be the Purdue defense. The Boilermakers’ pass defense was one of the better units in the nation last year, but pass rushing DE George Karlaftis is now in the NFL. Eight defensive starters return and they will be tasked with slowing down Penn State’s offense.

Penn State has won the last nine games in a row against Purdue. In the series between the two teams, the Nittany Lions hold a 15-3-1 advantage. They are also 10-4-1 ATS in the last 15 games against Purdue.

The Under has been the trend in this series. In the last 12 Penn State-Purdue games, the Under has hit nine times. The Under is 6-1 in Penn State’s last seven games and 12-3 in the team’s last 15 road games. Last season, the Under was 10-3 in Penn State games. Purdue’s conference games in 2021 averaged a total of 48.4 points, which is less than tonight’s game total.