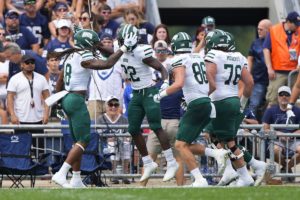 The Ohio Bobcats (7-3 SU, 7-3 ATS) have won all six of their MAC contests this season, covering all six of those games. When the Ball State Cardinals (5-5, 5-5) come to town tonight, the Bobcats are expected to keep their MAC winning streak alive.

Ohio was the underdog in four of their first five conference games. Now, oddsmakers are beginning to show more respect for Ohio as the Bobcats opened as a 4.5-point road favorite this week.

One of the big reasons for Ohio’s success is its quarterback Kurtis Rourke. He has quietly compiled some of the best throwing statistics in the country during Ohio’s 6-0 ATS run. The redshirt junior was ranked fourth in the nation in passing yards and seventh in passing efficiency heading into this week. Last week, Rourke threw for 363 yards and three touchdowns as Ohio recorded a 37-21 victory over the Miami RedHawks.

The Bobcats can also get it done on the ground. Sieh Bangura ran for 145 yards in last week’s win over Miami. The win marked the fourth time in the last five games that Ohio scored at least 33 points. The offense is a big reason why Ohio is 5-1 SU and 6-0 ATS in its six MAC games. The Ohio defense has also been playing well. The Bobcats D is coming off a great performance last week in which it limited Miami to 16 first downs and 69 rushing yards.

Ball State’s hopes for a berth in the MAC championship game were hurt by a difficult loss in Toledo last week. The Cardinals lost 28-21 at Toledo, which dropped the Cardinals to 3-3 SU in conference play and two games behind the Rockets in the West Division. It will be difficult for Ball State to win the West, but a victory tonight is a must.  The Cards were two-touchdown underdogs against the Rockets and fought back despite conceding the game-winning touchdown with just 1:18 remaining in the fourth quarter.

Running back Carson Steele accounted for each of Ball State’s three touchdowns and finished with a career-high 198 rushing yards in the loss to Toledo. In his last five games, Steele has rushed for at least 100 yards, and he has gone over 100 yards eight times this season.

The defensive strength for Ball State is its secondary, which limits opponents to only 217.3 passing yards per game. They will be put to the test tonight by Rourke. On offense, Steele’s success on the ground would be a plus as it could help keep the ball away from Rourke and the Bobcats’ offense.

Ohio has won four of its previous five games by at least 16 points. The Bobcats have won six of the last nine against Ball State, including the last three in a row. They are also 6-3 ATS in those nine games. Each of Ball State’s last five games has gone Under the total. In seven of Ohio’s last ten road games, the total has gone UNDER.