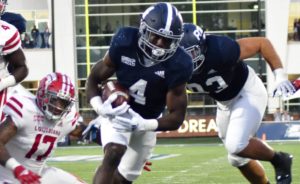 My math model only favors Nebraska by 17.49 points in this game and the Eagles are one of the most experienced teams in the nation, ranking 21st in returning production (73%).  In contrast, Nebraska is ranked 95th in returning production (56%) and continues to underperform under 5th-year head coach Scott Frost.  Frost is 16-30 SU and 18-24-2 ATS during his tenure in Lincoln, including 7-16 ATS as a favorite (0-2 ATS this year).

Desperate for a winning season, Frost brought in 44 new players, including 22 transfers.  Adding to the instability is new offensive coordinator Mark Whipple who served in the same role at Pittsburgh last year.  Texas transfer Casey Thompson was named the starting quarterback for the Huskers but he’s 2-6 straight-up in one-score games as a starter.  Following a 31-28 upset loss to Northwestern in Nebraska’s season-opener, the pressure continues to mount for Frost and the perpetually underperforming Cornhuskers.  The fact that Nebraska struggled last week against FCS North Dakota (tied late in the third quarter) speaks volumes about the direction of this program.

Georgia Southern made an excellent hire during the offseason in former USC head coach Clay Helton, who went 46-24 with the Trojans.  Helton retained former Western Kentucky offensive coordinator Bryan Ellis to help with the Eagles’ transition from a triple-option attack to a more balanced offense that incorporates a vertical passing game.  Former head coach Chad Lunsford began modernizing the offense in 2021 and Helton utilized the transfer portal to further expedite the transition.

Helton added Buffalo transfer Kyle Vantrease to run the offense, who started 26 games during his collegiate career at Buffalo, throwing for 4,755 yards (59%, 25-13).   The Eagles operated strictly out of the spread formation with empty back and one back sets during the spring and Vantrease looked comfortable in his Georgia Southern debut, completing 29-of-46 passes for 367 yards and four touchdowns in a 59-7 win over Morgan State.

Helton inherited Georgia Southern’s top five receivers from last season and used the transfer portal to bring in Houston transfer Jeremy Singleton, who averaged 15.0 yards per reception for the Cougars.  The talented junior caught five passes for 60 yards and one touchdown in his Statesboro debut, while last year’s leading receiver, Khaleb Hood, had six receptions for 88 yards and a touchdown.

Helton made an outstanding hire in Richard Owens as the team’s new offensive line coach as he is known for producing physical and disciplined units.  Finally, Nebraska has a game against Oklahoma on deck so a look-ahead is a distinct possibility.  Grab the points with Georgia Southern and invest with confidence.