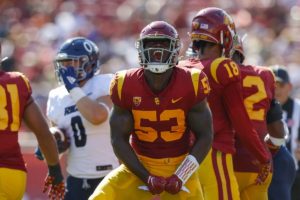 No. 8 USC, which is off to its best start since the 2008 campaign, will visit Pac-12 Conference rival Colorado tonight in Los Angeles in an effort to stay alive in the College Football Playoff debate. The Trojans (8-1, 6-1 Pac-12) overcame defensive lapses in last week’s 41-35 victory against Cal by relying on quarterback Caleb Williams’ five total touchdowns (four passing, one rushing) and an early lead.

In the win, USC pushed its season scoring average to 41 points per game. That ranks seventh in the nation. The win marked the third straight game in which the Trojans have scored at least 35 points. In a loss to Utah by one point on October 15, USC allowed 43 points and they gave up 37 in a win over Arizona on October 29. There will be no room for defensive lapses tonight.

Through nine games, the USC defense has been excellent at forcing turnovers, recording 18. The Trojans have the highest turnover margin in the country – plus-16 for the season. With Williams tearing it up on offense – he has 28 touchdown passes and just one interception – the combination has been deadly for Trojans’ opponents this season.

The underperforming offense of Colorado (1-8, 1-5), ranks last among Power Five-conference teams. Only Colorado State and Massachusetts have worse FBS scoring averages. The Buffaloes average a measly 15.6 points per game, which is almost unheard of in today’s era of spread offenses and points galore.

Since the beginning of the program in 1927, the Buffs have not defeated USC, a streak of 15 games. The Trojans have won the 10 encounters since Colorado joined the Pac-12 in 2011 by an average of 17.4 points per game, however, three of the most recent six were decided by four points or fewer.

To have a chance at an upset, the Buffs will need to avoid giving up possessions. Colorado is one of the most turnover-prone teams in the nation due to its 18 giveaways.

Quarterback J.T. Shrout led the Buffaloes in the final moments of their lone victory, an overtime victory over Cal on October 22. He had been benched for conference games against UCLA and Arizona in favor of freshman Owen McCown. Throughout the entire season, Shrout has thrown as many interceptions – six – as has thrown touchdown passes.