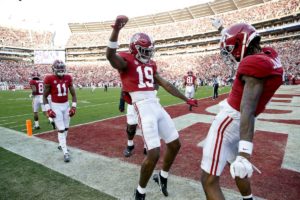 My math model only favors Alabama by 14.0 points in this game and the Longhorns are 7-3 ATS in their last ten games versus ranked non-conference opponents and 5-0 ATS in their last five games as double-digit underdogs. Since at least 1975, Texas has never been larger than a fourteen-point home underdog, a fact that has not been lost on the players and coaches alike.

However, under Nick Saban, Alabama has been a road favorite of 20-plus points away 26 times. Alabama is 26-0 SU and 18-8 ATS in those games, with only one contest decided by seven points or fewer.  The Tide are 13-7 ATS in their last 20 games as double-digit favorites and 11-4 ATS versus non-conference opponents since 2019 but Texas is 7-3 ATS in its previous ten games versus ranked non-conference foes.

Historically, the Longhorns have embraced the role of being large underdogs. In 2015, Texas defeated Baylor as a 20.5-point underdog in its final game of the regular season, and, in 1996, the Longhorns took down No. 3 Nebraska as 20.5-point underdogs in the Big 12 Championship game. This is Alabama’s first non-conference road game since 2011 and, last season, the Crimson Tide found themselves locked in close games in the fourth quarter against Florida, Tennessee LSU and Arkansas.

Alabama enters off a 55-0 win over Utah State, but Nick Saban must be concerned with the Tide’s lack of success on the ground. While Alabama finished with 278 rushing yards (6.6 yards per carry), 111 of those yards came on two carries, one of which was a scramble by quarterback Bryce Young. The Tide’s average drops to 4.6 yards per carry by taking out a single chunk play from Jahmyr Gibbs.

Alabama finished the game with a 54% offensive success rate, which ranked just 22nd in the country and came against a Mountain West Conference team that gave up 20 points to Connecticut, one of the worst FBS teams in the nation. Saban was the first to acknowledge that the Tide’s offensive consistency “wasn’t what it needed to be.”

The issue appears to be an underperforming offensive line that had Saban concerned in fall camp. “I don’t think there’s any question about the fact that we need to play better on the offensive line. We need to be more physical up front . . .and get movement on the run.” Last year, Alabama rushed for its lowest yards per game average since Saban’s first year in Tuscaloosa. The offensive line yielded 41 sacks, the most ever during Saban’s sixteen-year tenure.

The Longhorns’ attack is led by redshirt freshman quarterback Quinn Ewers, who skipped his senior year of high school to attend Ohio State. Ewers is one of the most decorated high school quarterback prospects in recent years and is a perfect fit for head coach Steve Sarkisian’s system. The talented signal-caller passed for 225 yards and two touchdowns in his debut, a 52-10 win over Louisiana-Monroe. “It’s a lot of fun,” Ewers said of the Texas offense and its multiple playmakers. “Especially when things are clicking on all levels.”

Sarkisian is a profitable 32-19 ATS (62.7%) at home during his coaching career. Each of the four teams he’s coached in college – Washington, USC, Texas, Alabama – were all above .500 against the spread at home. Finally, over the last decade, the Big 12 Conference has been the most profitable Power 5 Conference against the spread in September (or earlier) affairs, going 200-172-7 ATS. Grab the points with Texas and invest with confidence.