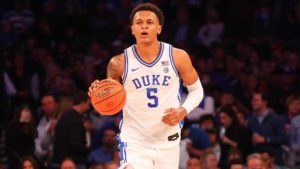 Duke took over sole possession of first place in the ACC with its 87-67 win over North Carolina on Saturday. It was Duke coach Mike Krzyzewski’s final trip to Chapel Hill and it was another huge win for the ninth-ranked Blue Devils. Duke is now 9-2 in ACC play and has won its last five conference games by an average margin of 13 points. Duke has covered the spread in four of those five games. The only time the Blue Devils didn’t cover in that span was as an 11.5-point favorite against Clemson. Duke won 71-69.

Tonight, Coach K’s team is once again an 11.5-point favorite against Virginia, which is just three years removed from a national championship. Virginia head coach Tony Bennett and his Cavaliers are 14-9 this season and 8-5 in ACC play. They have won their last two games – Miami and Boston College – by an average of 12.5 points. The Cavaliers are sluggish on offense. They average just 63.2 points per game, which ranks 335th in the nation. In their win over Miami on Saturday, Virginia scored 71 points. It was the first time they hit 70 or more in over a month.

Bennett and his Virginia team is well-known for its defense. The Cavaliers routinely rank among the best in the nation and this year is no different. Virginia allows 59.5 points per game which ranks 10th in the country. They held both Miami and BC to less than 60 points (58 and 55, respectively). Virginia has only given up 70 or more points twice in its last ten games. Not surprisingly, both games – North Carolina and North Carolina State – were losses.

Duke is led by super 6-foot-10-inch freshman Paolo Banchero who averages 17.5 points and 8.4 rebounds per game. Wendell Moore Jr. is the only other Blue Devil player that averages in double figures (14.2 ppg). Duke ranks 15th in the nation in scoring averaging 80.7 points per game.

As good as Virginia has been over the past few years under Bennett, Duke has dominated the series between the two teams. The Blue Devils have won seven of the last ten games. Virginia has won at Duke just one time since the 1994-95 season. In the last five games at Cameron Indoor Stadium, Duke is 5-0 but the Blue Devils won those five games by an average of just two points. Covering 11.5 points tonight could be difficult.

As solid as Virginia’s defense is, the Over is 5-1 in their last six games. The Cavaliers have faced some extremely low totals. Duke, with its high-scoring offense, has seen the Under hit in four of its last five games. Virginia and Duke rank first and second in points allowed per game in the ACC. The Cavaliers actually allow six more points per game when playing on the road than at home.