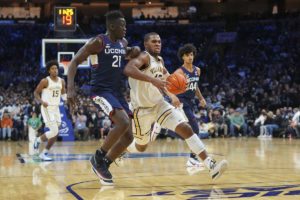 It’s a classic Big East showdown as No. 8 Villanova travels to No. 21 Connecticut. The Wildcats are peaking at the right time. Head coach Jay Wright’s team has won five straight including a huge 89-84 win over Providence on the road last week. The Wildcats followed that up with a win over Georgetown on Saturday and now have a shot to at least share the Big East title.

Connecticut has won three straight and four of its last five. On Saturday, the Huskies avenged an earlier loss to Xavier with a 72-61 victory. Connecticut held the Musketeers to just 5-of-17 shooting from behind the arc and outrebounded them 42 to 26. The Huskies will need to continue with that defense and rebounding ability to have a shot at avenging another early-season loss.

Villanova won the first meeting this season 85-74 back on Feb. 5. Eric Dixon scored 24 points to lead the Wildcats and leading scorer Collin Gillespie (16.6 ppg) had 19 before leaving the game with a sprained ankle. With Gillespie at the point running the Villanova offense, the Wildcats are hard to stop. Just ask Providence. Gillespie scored 33 points in the victory over the Friars last Tuesday.

Both teams are solid defensively. Villanova gives up 63.1 points per game and Connecticut allows 65.1. The Huskies do a great job of not allowing too many points in the paint and they defend shooters well. Connecticut ranks No. 20 in the nation in opponent field goal percentage holding teams to 39.5 percent shooting. In UConn’s current three-game winning streak, the Huskies allowed 61, 65, and 60 points.

The last time the Wildcats played at Connecticut they were 15.5-point favorites. Villanova won that game 81-61. The Wildcats have only been an underdog four times this season. They are just 1-3 SU when playing the underdog. Connecticut is 19-3 as a favorite.