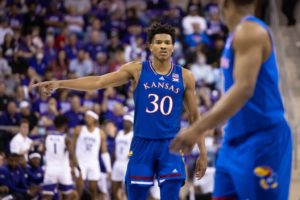 No. 1 seed Kansas begins its potential run to the Final Four with No. 16 Texas Southern tonight. The Tigers had to beat Texas A&M-CC in a First Four game to advance to tonight’s game. Texas Southern was able to get that win by doing what it does best – play defense. The Tigers held their First Four opponent to just 0.86 points per possession in a 76-67 win. The problem tonight is that Kansas is a much more efficient offense.

The Jayhawks actually finished first in a very competitive Big 12 in adjusted offensive efficiency. The Jayhawks are one of the top-scoring teams in the country, averaging nearly 80 points per game. They are a top 20 shooting team and won their last five games in a row, which was capped by an impressive 74-65 win over Texas Tech in the Big 12 championship game.

Texas Southern will have no answer for Kansas guard Ochai Agbaji. The 6-5 senior averages 19.7 points and 5.1 rebounds per game for the Jayhawks. He’s a big reason why Kansas finished 28-6 this season. The Jayhawks have won nine of their last 11 games and they are 4-1 ATS in their current five-game winning streak.

Texas Southern was an underdog of 19.5 points or more three times early on this season. The Tigers covered the large spread in all three games and actually won one of them outright. In early December, Texas Southern upset Florida 69-54 as a 23.5-point underdog. It was one of this season’s biggest upsets.

The Tigers have been trending Over in game totals. Six of their past eight games have seen the total go Over. For the season, the Tigers’ O/U record is 14-17. Kansas has faced some higher totals and, as a result, four of their last six games have gone Under. Over the course of the season, the Jayhawks’ O/U record was 18-14-2. In eight neutral site games this season, the Over dominated Kansas games. In those eight games, the Over was 5-2-1. The Jayhawks have scored at least 70 points in nine of their last ten games. Texas Southern has scored at least 70 in eight of their last ten.