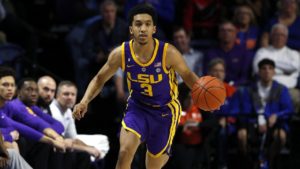 Texas A&M is third in the SEC standings, but the Aggies have dropped two straight since starting the conference season 4-0. LSU has lost three straight but still finds itself ranked No. 19 in the nation. The Tigers lost tough games to Arkansas, Alabama, and No. 24 Tennessee. The Aggies lost by six to Kentucky and by three to Arkansas. With the conference beating up on each other – except for No. 1 Auburn – tonight’s game could go a long way in determining who makes March Madness and who doesn’t.

The Aggies have had some issues on the offensive end this season, but they are very good on defense. Despite their close losses and 4-0 start in SEC play, Texas A&M opened as a 12-point road underdog. The line has shifted down to LSU -8.5, which is a pretty big number considering the Tigers haven’t won a game in two weeks.

Texas A&M is going to have to overcome what is the nation’s best defense. LSU is ranked No. 1 in defensive efficiency. The Tigers hold opponents to 58 points per game which ranks seventh in the country. They have given up 70 points just twice in their last ten games and in that span held four opponents to 60 or fewer points.

LSU is led by Tari Eason who averages 16 points and 7.1 rebounds per game. Darius Days (13.1 ppg) and Xavier Pinson (10.9 ppg) also average in double figures for the Tigers. Days and Pinson have had some injury issues and are questionable for tonight.

The Aggies’ top scorer is G Quenton Jackson who averages 12.6 points a game. Henry Coleman III (11.1 ppg) and Marcus Williams (10.0 ppg) are the only other double-digit scorers for Texas A&M. All three players are going to have to come through for the Aggies tonight. Historically, LSU has owned Texas A&M for the past several years.

LSU has beaten the Aggies in eight straight games. In the last three games, the Tigers have held Texas A&M under 60 points twice. The Aggies have scored over 70 points just once in their last four games while LSU’s last four opponent point totals were 64, 70, 65, and 58.

Because of defense, both teams are very good against the spread, especially recently. Texas A&M is 4-1 ATS in its last five games and 9-8-1 ATS for the season. LSU has been one of the best in the country against the number going 14-5 ATS. The Tigers are 10-2 ATS at home.

LSU has also crushed the Under this season. In 19 games so far, the Under is 16-3 in LSU games. In their last game, a 64-50 loss to Tennessee, the game total was 132 which was a season-low. Tonight’s total of 130 is a new season low. Opposite the Tigers, the total has gone Over in nine of Texas A&M’s last 12 games. The total has also gone Over in five of the Aggies last six road games.