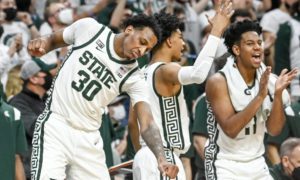 The top team in the Big Ten, Michigan State, goes on the road to take on No. 24 Illinois which is tied for second place in the conference with 11th-ranked Wisconsin. The Spartans (15-3, 6-1) are ranked No. 10 in the country and, despite a 4-0 road record so far this season, find themselves 5.5-point underdogs tonight.

Illinois 7-footer Kofi Cockburn has missed the Illini’s last two games. Without him, Illinois has lost consecutive games to No. 4 Purdue and unranked Maryland. Cockburn is listed as questionable for tonight’s game. If he doesn’t play, the Illini defense will struggle. They gave up 96 points in the loss to Purdue and 81 to Maryland.

The Illinois defense allowed Purdue to score 1.13 points per possession. Maryland averaged 1.23. Over the last five games, Illinois has allowed its opponents to shoot over 45 percent from the field. If that continues, the Illini will be in trouble tonight against a Michigan State team that has been rolling in Big Ten conference play.

The Spartans rank first in the conference in effective field goal percentage and they are shooting 47.5 percent from the floor. Head coach Tom Izzo’s team scores over 74 points per game in conference games and is second in three-point field percentage and third in offensive rebounding rate. With or without Cockburn in the lineup, Michigan State presents problems for the Illini.

Michigan State actually rivals Illinois in size. The Spartans have a 7-footer of their own in Marcus Bingham (9.6 ppg, 6.9 rpg) and the team ranks 10th in the nation in average height. Senior forward Gabe Brown is 6-foot-8 and leads the Spartans in scoring averaging 13.6 points per game. Malik Hall averages 10 points and five rebounds a game and also stands 6-8.

Illinois will also miss Cockburn on the offensive end if he doesn’t play. He is the team’s leading scorer with 21.1 points per game. Illinois is actually a top-30 scoring team averaging 79.3 points per game. The Illini has failed to hit 70 in two of their last three games.

The Illini are 9-9 ATS on the season but over their last 12 games, they have covered the spread eight times. The Spartans have not been as good against the number going just 2-4 ATS in their last six games. MSU is, however, a perfect 4-0 ATS on the road this season. The Spartans are also 6-3 ATS in the last nine games against Illinois.

Both teams trend toward the Over. The total has gone Over in seven of the last nine Michigan State games. For Illinois, the Over has cashed a winning ticket in 11 of the team’s last 14 games. In Illinois’ last two games – the losses to Purdue and Maryland – the total went way Over. The total has gone Over in nine of the last 12 games in which Illinois has played as the favorite.