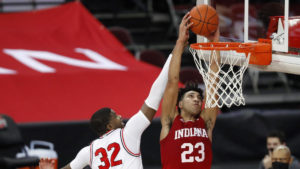 After losing four straight, Indiana will find breaking that streak difficult as the Hoosiers take on No. 18 Ohio State (16-7) tonight. The Buckeyes are still in the hunt for the Big Ten title. At 9-5 in conference play, they trail Illinois and Wisconsin by a game and a half and Big Ten leader Purdue by 2.5 games. Ohio State was upset at home by Iowa 75-62 on Saturday. The Buckeyes shot a dismal 18.2 percent from three-point range in suffering their first home loss of the season. Ohio State is 11-1 at Value City Arena in Columbus.

Tonight’s game will be a matchup of two of the best big men in the Big Ten. For Ohio State, it’s EJ Liddell who leads the Buckeyes in scoring (19.7 ppg), rebounding (7.6 rpg), and blocked shots (2.4 bpg). He’s a conference player of the year candidate as is Indiana’s Trayce Jackson-Davis. The 6-9 sophomore leads the Hoosiers in the same three categories scoring 18 points, grabbing 8.3 rebounds, and recording 2.6 blocks per game.

Despite Jackson-Davis’ recent performances, the Hoosiers have dropped four in a row to Illinois, Northwestern, Michigan State, and Wisconsin. They have yet to win a game in February and the Hoosiers struggle on the road. They are just 2-6 away from home this season. Even worse, Indiana is just 1-7 ATS when playing on the road this year.

Ohio State is looking to bounce back after the loss to Iowa. The Buckeyes have won six of their last nine games with the other losses to a surging Rutgers and to conference leader Purdue. Liddell is, of course, the key for Ohio State and he’ll have to play well against Jackson-Davis for the Buckeyes to win. What Liddell has that Jackson-Davis does not is a better supporting cast. Freshman Malaki Branham is the only other Buckeye that scores in double figures (11.2 ppg), but seven Buckeyes play at least 22 minutes per game.

The Buckeyes average 74 points per game which is surprising because they play at one of the slower paces in the nation. Ohio State ranks 309th in average possession length and 290th in adjusted tempo. What that speaks to is their ability to shoot the basketball. They rank in the top 30 in both two-point and three-point field goal percentages. Lately, though, the Buckeyes have struggled to hit the 70-point mark just once in their past four games.