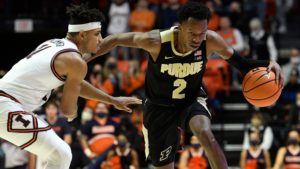 When these two teams played in January, Illinois 7-footer Kofi Cockburn got into early foul trouble and the two Big Ten powers battled in double overtime. Purdue would end up a 96-88 winner as Cockburn was limited to 10 points and five rebounds. The Boilermakers are now 20-3 and ranked No. 3 in the country. Illinois is ranked 13th and at 10-2 in the Big Ten is first in the conference. To hold onto that lead, the Illini will need a revenge win in West Lafayette.

Purdue has won its last five straight and has scored 80 points or more in each victory. The Boilermakers average 84.5 points per game which is the fourth-highest in the nation. Jaden Ivey leads Purdue with 17.3 points per game and teammate Zach Edey, who is 7-foot-4-inches, adds 14.9 points and 7.6 rebounds per game. Purdue is extremely deep and head coach Matt Painter plays ten guys at least 15 minutes per game.

Edey isn’t nearly as talented as Cockburn, but Purdue is big upfront and will be able to challenge the Illinois big man. Purdue is a strong paint defense team, but where they are weak is in defending the three-pointer. Painter’s team actually ranks 11th in the Big Ten in opponent three-point rate and Purdue allows teams to shoot over 35 percent from long range. That just happens to be a strength for Illinois. The Illini shoot 37 percent from behind the arc. Purdue is going to have to do a great job of contesting those shots.

Three-point shooting is also a strength for the Boilermakers. They actually have the third-best three-point field goal shooting percentage in the nation. Purdue is one of just five teams that shoots over 40 percent from three. The Boilermakers make 41.1 percent of their long-range jump shots. That could be a problem for Illinois, but as of late, the Illini have been pretty good defensively.

Illinois lost to Purdue and then didn’t have Cockburn in a loss to Maryland. Since losing those two games, the Illini have won four straight and did it by limiting those four opponents to just 58.7 points per game. Illinois allowed 55, 56, 67, and 57 points in those four wins. Limiting Purdue to around 60 points will be extremely difficult, but if Cockburn stays out of foul trouble Illinois should keep things close.