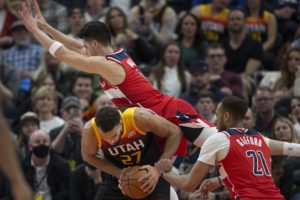 The University of Utah men’s basketball team played No. 20 TCU on the NBA court right next to campus on Wednesday night, taking advantage of a Utah Jazz off day. When the Washington Wizards visit the Jazz in Salt Lake City tonight, a few players who are particularly dear to the Runnin’ Utes program will be present in the same arena.

Kyle Kuzma, a former standout for Utah, is likely having his best NBA season to date. Last month, Kuzma contributed significantly to Washington’s 121-112 victory over the Jazz in Washington, D.C. He finished with 23 points, eight rebounds, and six assists.

The 2017 All-Pac-12 first-team selection put up another beauty in his recent performance. On Tuesday night, Kuzma led Washington to a 113-110 victory at Phoenix. He scored 29 points, grabbed six rebounds, and dished out six assists. The victory ended a 10-game losing streak for the Wizards. With an average of 23.1 points and 7.0 rebounds during the Wizards’ losing streak, Kuzma was one of the few bright spots.

Delon Wright played point guard for the University of Utah and he may or may not join Kuzma on the court tonight. After missing nearly two months due to a hamstring injury, Wright might play at Utah, according to Wizards head coach Wes Unseld Jr. Wright is listed on the injury report as out indefinitely.

Kristaps Porzingis’ situation is also uncertain. Due to a non-COVID illness, Porzingis, who destroyed Utah for 31 points in Washington last month, was unable to play against the Suns on Tuesday. Unseld said that Porzingis’ illness doesn’t seem like anything significant. The Wizards star is listed as questionable for tonight.

The Jazz are coming home from a three-game road trip on the East coast. The swing started out with two lopsided losses. Utah lost to Milwaukee and Cleveland by an average of 24.5 points each. The trip came to a successful conclusion with a 126-111 victory at Detroit on Tuesday night. Lauri Markkanen scored 38 points, tying a career-high, against the Pistons. In the first game against the Wizards, Markkanen scored 17 points.

Utah plays six of its next nine games on the road. The Jazz do have three home games left before the calendar flips to the New Year. The Wizards will play Sacramento tomorrow night to complete a six-game West coast road trip. Neither team will play on Christmas Eve or Christmas Day.

Utah has played well at home recently going 5-2 SU in the last seven games. The Jazz are 4-2 ATS in their last six games overall but only 1-4 ATS in the last five against Washington at home. The Over is 6-2 in the last eight Wizards-Jazz games.