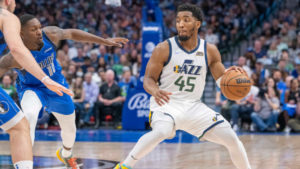 The big news once again in the Jazz-Mavericks series is the health of Dallas star Luka Doncic. He suffered a strained calf in the Mavs final regular-season game. Doncic missed Game 1 of this playoff series and Dallas battled but lost 99-93 to Utah. Donovan Mitchell scored 32 points for Utah to lead the winners.

Utah didn’t play well on Saturday as they were unprepared for how Dallas would play without Doncic. The Dallas star is listed as doubtful for Game 2, which is why the Jazz are once again a 5.5-point favorite on the road. The Mavs’ defense clamped down on Utah holding the Jazz to just 99 points. Offensively, Dallas relied on its backcourt of Jalen Brunson and Spencer Dinwiddie who combined for 46 points. If Doncic doesn’t go again tonight, it will be up to Brunson (24 points) and Dinwiddie (22) to come through again.

The Jazz had to hit some late free throws in order to cover the spread in Game 1. Utah has had a rough time all season long against the number. Over their last 12 games, the Jazz are just 3-8-1 ATS which gives Utah a 37-45-1 ATS mark for the season. Dallas, on the other hand, has been a solid team to back this year, especially at home. Over the Mavs’ last 12 games, they are 8-3-1 ATS giving them a 47-34-2 ATS record for the season. Dallas is 23-17-2 ATS in home games this season.

Despite the loss, Dallas is now 7-2 SU in its last nine games overall and 6-1 SU in its last seven games at home. What’s interesting is that with the win on Saturday Utah is now 13-5 SU in the last 18 games the Jazz has played against Dallas. The Jazz have won four of their last five games overall.

Defense took over Game 1 and the result was the Under. Tonight’s total has gone down even lower and is now at 205.5. Remember, Dallas is No. 2 in points allowed per game this season (104.6). The Mavs have allowed an average of 99 points per game over their last three games which is impressive considering they gave up 120 to San Antonio in one of them.

Because of its defense, Dallas sees some relatively low totals and, as a result, six of the Mavs’ last eight games have gone Over the total. Utah has been trending Under with four of their last six games resulting in the Under. Eleven of the Jazz’s last 13 games on the road have gone Under the total. Five of the last six on the road in Dallas have gone Under. That includes all three games played in Dallas so far this season. Those last three games have averaged a total of 206.7 points.