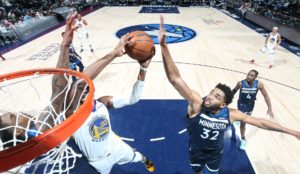 Minnesota has won four of its last five games and the Timberwolves are now over .500 and in seventh place in the Western Conference. That puts the T-Wolves ahead of teams like the Lakers and Clippers. Minnesota will be put to the test tonight though as they take on Golden State at home. The Warriors have the second-best record in the NBA (35-19) behind Phoenix and they are very good at home. Golden State is 22-4 at the Chase Center so far this season.

The Timberwolves can fill it up. They are a top-10 offense averaging 111 points per game. Karl-Anthony Towns leads the team in scoring averaging 24.1 points per game. Anthony Edwards is close behind with 22.7 points a game. In the backcourt, D’Angelo Russell averages 19.1 points and seven assists a game. His running mate, Patrick Beverley, is questionable for tonight. He is the T-Wolves’ best backcourt defender and if he is unable to play it could be Russell and Edwards playing together. That makes Minnesota big in the backcourt which might not be a bad thing against Golden State.

The Warriors have won three straight – Houston, Utah, and Dallas. The wins came after a surprising home loss to Indiana. Just two games prior to that loss, the Warriors lost on the road at Minnesota by 20. Stephen Curry did not play in that game for Golden State.

Draymond Green, who has been out for the past several games, will not play again tonight. Andre Iguodala is also out. Klay Thompson has been back in the lineup for Golden State after missing the past two seasons. Thompson is still getting acclimated to playing again and the Warriors are taking their time with him. When the Warriors beat Dallas on Tuesday night, their leading scorer was rookie Jonathan Kuminga who had 22 points.

Neither team has been very good against the number recently. Golden State is 1-2-1 ATS in its last four games though they are one of the NBA’s best with a 26-19-3 ATS record for the season. The Warriors are also 16-8-2 ATS when playing at home. Minnesota is just 2-5 ATS in its last seven games and the T-Wolves are 0-5 ATS in their last five games on the road. Minnesota hasn’t won at Golden State in its last ten trips.

The Warriors hold teams to 99 points per game. That, of course, is the best in the league. The result has been an Over/Under record of 17-29-2 overall and 8-16-2 at home. Minnesota is not as good defensively and, as mentioned, is a top-10 offense. Still, tonight’s total of 227.5 seems a bit high. Golden State has had only one game with a higher total and that came last week against Houston. That game went Under. In the last five games played between Golden State and Minnesota, the total has gone Over.