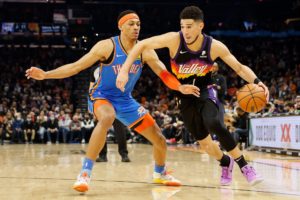 While Oklahoma City has one of the worst records in the NBA, the Thunder have been one of the most profitable teams to back this season. Only Memphis has a better record against the spread this season. The Thunder is 35-19-4 ATS with an impressive 15-9-4 ATS mark at home. Tonight, they face a double-digit spread against the best team in the NBA – Phoenix.

The Suns got some bad news over the All-Star break when it was announced that Chris Paul will be out indefinitely with a fractured thumb. Phoenix was supposed to get Cam Payne and Landry Shamet back, but Payne will remain out tonight. Shamet is listed as probable. Despite being down a few players, the Suns still have leading scorer Devin Booker and big man Deandre Ayton in the lineup and they were big reasons why the Suns won seven straight before the All-Star break.

Phoenix has won the last four straight over OKC, but three of those four games were at home. The Suns have won both games against the Thunder this season. Both of those games were at home in the Footprint Center. It’s almost hard to believe, but the Suns are just 1-16 SU in their last 17 trips to play Oklahoma City. That one win came last spring when Phoenix won 123-120. The Suns didn’t cover as 15.5-point favorites.

The Thunder have some issues though with Shai Gilgeous-Alexander out of the lineup due to injury. Lu Dort will also be out tonight and OKC has just one win in its last seven games. Rookie Josh Giddey is doing his best to make up for OKC not having its top scorer (Gilgeous-Alexander), but can he do it against a team like Phoenix? That remains to be seen.

Phoenix is one of the top-scoring (4th) teams in the NBA. OKC is dead last, but the Thunder’s defense has been known to give up some points, especially when playing the Suns. Four of the last six head-to-head meetings have gone Over the posted total. The Suns have seen the total go Over in five of their last six games

Both teams might be sluggish after the All-Star break. The Suns will be without Paul and the Thunder will not have their top scorer in Gilgeous-Alexander and Dort, their second-leading scorer. The injury report is the big reason why tonight’s total is 215.5. The last three games in the series have been pretty prolific. The Suns averaged 117 points while the Thunder scored an average of 106 for a combined average of 223 over those last three head-to-head meetings.