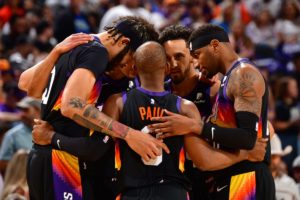 The Philadelphia 76ers have struggled through their first 10 games due to injuries and illnesses, but their star is recovering and could play tonight. As the Sixers prepare to meet the Phoenix Suns on Monday, Joel Embiid, who has missed three consecutive games due to a non-COVID illness, is listed as questionable.

James Harden, who is averaging 22 points per game, will be out for at least a month due to a torn foot tendon. Getting Embiid back is essential for the Sixers to turn things around following a 4-6 start.

After the Sixers’ 106-104 loss to the New York Knicks on Saturday, head coach Doc Rivers said that Embiid didn’t look good during the team’s shootaround. Rivers and the Sixers held Embiid out of the game against the Knicks. When the season began, Embiid already had plantar fasciitis and appeared lethargic.

Sixers F Tobias Harris picked up the slack and finished with 23 points and nine rebounds in the loss to the Knicks. Players like Harris and Tyrese Maxey (31 points), for example, will be expected to perform even more without Harden and potentially without Embiid. Harris is averaging 14.4 points per game. Maxey is on fire averaging 24.9 a game.

The Suns will try to keep up their winning streak after defeating the Portland Trail Blazers on Saturday by a score of 102-82. Without Cameron Johnson (right knee) and Cameron Payne (left foot0, the Suns won easily thanks to Devin Booker’s 24 points and Chris Paul’s 15 points.

Johnson will have surgery to repair a torn meniscus, the Suns reported on Sunday. There was no schedule given for his return. Johnson was a finalist for the NBA’s Sixth Man of the Year award last season. Even without Johnson, the Suns have the best depth in the league which will make the transition easier.

Torrey Craig will likely play more minutes for Phoenix. In 22 minutes against Portland, he scored five points, had five rebounds, dished out four assists, and also recorded three blocks. Suns head coach Monty Williams was pleased with Craig’s effort and knows that he will be asked to do even more with Johnson out of the lineup for a while.

The Suns have won six of their last seven games. Phoenix held all but one of their last seven opponents to 109 points or less. The Suns are No. 2 in scoring defense in the NBA holding opponents to just 103.9 points per game. The Under has cashed in four of the Suns’ last five games on the road. However, the Over is 9-1 in Phoenix’s last 10 trips to Philadelphia.

The Sixers are 4-8 both SU and ATS in their last 12 games. The total has gone Over in four of Philadelphia’s last six games and four of its last five against Phoenix. The Under is 5-1 in the Sixers’ last six home games.