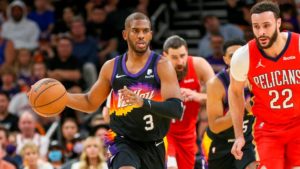 The big news in Game 3 of the Suns-Pelicans series is the health of Devin Booker. The Suns leading scorer left Game 2 early in the third quarter with tightness in his hamstring. He will miss Game 3 and is now expected to miss a few weeks. With Booker out of Game 2’s second half, the Pelicans found some life and captured a 125-114 victory behind 37 points from Brandon Ingram. New Orleans has some serious momentum heading into tonight’s game at home.

The Pelicans can really put a wrench into the Suns’ NBA title hopes with a win in Game 3. New Orleans has won eight of its last 12 games and is really playing well despite not having its best player – Zion Williamson. Ingram can be an elite scorer and C.J. McCollum has been a great addition since his trade from Portland. McCollum is averaging 24 points a game in the series so far. Jonas Valanciunas (14 ppg) and Larry Nance Jr. (13.5 ppg) also average in double figures.

What has led to Phoenix setting a franchise record for regular season wins – 64 – is incredible depth. Throughout the course of the 2021-22 season, the Suns have had to play without key players on several occasions. Phoenix played 12 games without Booker this season. They managed to go 8-4 without him. With guys like Cam Johnson (12 ppg) to help pick up the slack, the Suns could very well shrug off the fact that they are missing Booker tonight.

Chris Paul is averaging 23.5 points and 12 assists per game so far in the series. Deandre Ayton adds 15.5 points and nine rebounds a game. Phoenix is the better defensive team as well. Mikal Bridges was a finalist for the NBA Defensive Player of the Year and the Suns are a top-5 team in defensive efficiency. Phoenix allows 107.4 points per game, which ranks ninth among NBA teams. They did hold New Orleans to just 99 points in Game 1. That’s the type of effort they will need tonight in Game 3.

With the Game 2 loss, the Suns are now 12-5 SU in their last 17 games. They have had some issues covering the spread as they are only 3-6 ATS in their last nine games. Against New Orleans, they have had success against the spread. In the last seven games between the two teams, Phoenix is 5-2 ATS.