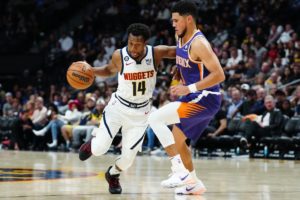 The Phoenix Suns will be a double-digit underdog for the second night in a row when they face the Western Conference leader Denver tonight on the road. The Suns were a 12.5-point underdog last night at Golden State. It wasn’t a surprise. The Suns had lost six straight games, and the Warriors welcomed Stephen Curry back to the starting lineup. Phoenix was also playing without Deandre Ayton as well as leading scorer Devin Booker. The surprise came when the Suns won 125-113.

Now, Phoenix gets the 27-13 Nuggets who have won three straight and five of their last six. Tonight will be the second of four games the two teams will play this season. Denver beat Phoenix in overtime on Christmas Eve. In that game, Denver’s Nikola Jokic had a triple-double with 41 points, 15 rebounds, and 15 assists. The two-time MVP hasn’t slowed down either. He only attempted five shots, but all of them were successful, resulting in his league-leading 11th triple-double of the year on Monday night against the Los Angeles Lakers. In the Nuggets’ 122-109 win, Jokic had a season-high 16 assists.

Jamal Murray had a season-high 34 points against the Lakers. Murray has been playing much better. He continues to become more confident after missing all of last season with a knee injury. Denver head coach Michael Malone points out that it’s not just Murray’s ability to score, but his defense that is improving as well.

After defeating the reigning NBA champions on the road, Phoenix has gained a little confidence. The Suns will be without Booker (groin), Chris Paul (hip), and Cameron Payne (foot) in addition to Ayton, who is listed as questionable. Landry Shamet (hip) is also questionable for tonight. The Suns’ injuries have forced head coach Monty Williams to use 14 different starting lineups this season.

With the exception of four minutes, Booker has been out since Dec. 17, when he scored 58 points against New Orleans. He missed the next three games before coming back for the first game against Denver. He left that game early in the first quarter and he is expected to be out for at least another two weeks.

On Monday when Denver defeated the Lakers, LA was without LeBron James and Anthony Davis. Tonight, the Suns will be missing much of their best starting lineup. The Nuggets will be looking to increase their home winning streak to 12 games.