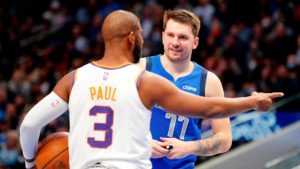 After winning Game 1 by seven points, the Phoenix Suns pounded Dallas by 20 in Game 2. The Mavericks return home tonight as a one-point underdog and with their backs against the wall. Dallas trails 0-2 in the series and needs a win tonight to avoid the deadly 0-3 curse. No NBA team has ever come back to win a playoff series after going down 0-3.

Dallas hasn’t had much success against Phoenix either. The Suns have now beaten Dallas in 11 straight games. In those 11 games, Phoenix is also 9-2 ATS. If the Mavs intend on having a shot at winning tonight, they are going to have to get some production from someone other than Luka Doncic. The Mavs star went off for 45 points in Game 1 and followed that up with a 35-point effort in Game 2. In Game 2, no other Dallas player scored over 16 points and only three scored in double figures.

Phoenix proved why it is the favorite to win the NBA title. Deandre Ayton got into foul trouble early and only scored nine points in Game 2. The four other Suns starters all scored in double figures. Devin Booker led the way with 30 points followed by Chris Paul’s 28. Phoenix shot a very healthy 52 percent from three-point range and 64.5 percent overall. If the Suns continue to shoot like this and Dallas doesn’t get help from the rest of its lineup, the Suns are going to end this series early.

The Mavs are 11-5 SU in their last 16 games and they have excelled at home, especially recently. Dallas is 31-13 SU at home this season and they have won eight of their last nine at American Airlines Center. The big problem for Dallas is that they just haven’t been able to crack the Suns for a long time. To avoid a series sweep, the Mavs need to find a way to pull the upset.