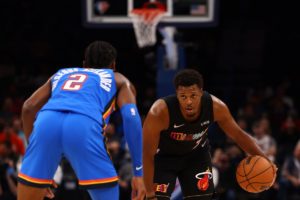 When the Oklahoma City Thunder travel to take on the Miami Heat tonight, it will be a Kentucky reunion. Shai Gilgeous-Alexander of Oklahoma City, who was selected 11th overall and in the first round out of Kentucky in 2018, has improved his scoring average each of his five NBA seasons. SGA will face former Wildcat Tyler Herro of Miami, who was the 13th pick in the 2019 NBA draft. Both players have been playing extremely well for their respective NBA franchises.

With an impressive season average of 30.9 points, 5.6 assists, 4.8 rebounds, and 1.6 steals, the 24-year-old Gilgeous-Alexander has developed into a monster. He shoots 34.3 percent on three-pointers and 52.7 percent on two-pointers, and he leads the Thunder in free throw percentage (91.1). This season, he has an impressive 24 games in which he scored at least 30 points.

Herro is averaging a career-high 21.2 points. He is also averaging 6.0 rebounds, 4.4 assists, and a steal per game. He will turn 23 on January 20. Heat center Bam Adebayo averages 21.4 points and 9.9 rebounds, but he has been dealing with a thigh injury and a right hand contusion. He is a third former Kentucky player who is anticipated to play on Tuesday.

In a 102-101 loss to the visiting Brooklyn Nets on Sunday night, Butler missed what would have been the game-winning shot at the buzzer. Butler is averaging 21.6 points, 6.4 rebounds, 5.6 assists, and 2.1 steals per game this season. For Butler and the rest of the Heat, it’s games like that they must figure out how to win.

Three of the Thunder’s last four games have ended in victories. Sunday night the Thunder recorded a 120-109 victory over the visiting Dallas Mavericks. Star player Luka Doncic wasn’t in the Dallas lineup.

Against the Mavericks, Gilgeous-Alexander scored 33 points while connecting on 11 of his 17 field goal attempts. Also, he made 11 out of 13 free throws.

While Gilgeous-Alexander is the face of the Thunder’s resurgence effort, other important players include 6-7 forward Josh Giddey, who averages 15.3 points, a team-high 7.8 rebounds, and 5.4 assists. Lu Dort, a 6-foot-3 guard is an elite defender who is averaging 14.3 points per game.

Along with Gilgeous-Alexander, Dort, and Giddey, the Thunder’s young core also features 7-foot rookie center Chet Holmgren, who is only 20. Due to a foot injury, Holmgren, the second overall pick in the 2022 NBA Draft, will miss the entire season. Another rookie first-round pick for the Thunder is the 6-6 wing Jalen Williams. He has performed admirably, starting 23 of his 36 games and scoring 11.6 points per game.